Bishopstoke Road looking towards the Mill. The Prince of Wales, now a Tesco Express store had a central entrance door. To the right of the building is an opening for carriages to enter the rear yard. If you observe this building next time you pass, you can see the change in brick colour where these features used to be. The Prince of Wales was originally a shop, set up in 1834 by a Jonathon Barstow. By 1864, the business had been sold to Penny and Dear, Brewers.

In August 1893 there was a concern raised by the authorities regarding the quality of water used by patrons. Water was sampled from a well 26ft from the premises, which was close to a drop toilet (W.C.) and, according to an investigation by the Medical Officer of Health, was very contaminated with you know what!!! There was also a pond 56 ft from the house where water was drawn for the brewing of beer. This pond was also close to the Itchen Canal, where dead animals and animal matter were frequently found. In addition to being a licensee, the landlord also kept cows. The medical officer demanded that “The public should also have the right to a pure water supply,” and issued instructions accordingly.

These conditions were not uncommon at the time, and it was far safer in those days to drink beer, rather than water, because the water used to brew beer had been boiled. The landlord, unsurprisingly, took water for domestic purposes (his own families personal use) from the well at Bishopstoke Mill.

The quality of beer provided by the Prince of Wales was not an issue when this picture of the wonderfully named Cork Club assembled for an outing during the early 1900s.

These pictures are of the rear and bar area of the Prince of Wales before it ceased trading in April 2011.

One particularly memory of the Prince of Wales, from the 1950s, is of the landlord’s old English sheep dog which would sit on the front doorstep of the pub and rush out to bite the ankle of any passing cyclist. Every day, the poor moth-eaten old mutt was exhausted by the time the hordes of workers from the Carriage Works had gone home for lunch.

The cottages between the Prince of Wales and the mill stream were demolished and became the offices and workshop for Edward J. Coe, who ran a haulage business for sand and gravel. He had a large sand pit at Fair Oak, behind what is now the telephone exchange and a gravel pit at Halterworth, near Romsey.

In the 1950s “Jack” Coe made a water wheel to go into the stream alongside the workshop to power a generator that could be used to supply electricity to part of his premises. Whilst today this may be considered forward thinking, he was more than a little upset when his initiative had been interpreted by the electricity board as generating electricity without a licence, and the water board had similarly taken umbrage for misuse of company water. Both companies were planning to prosecute.

The building to the right of the mill stream, became a factory. Sleyride made a variety of wheelchairs here in the 1960s. We have been told by the son of the owner, that the wheelchair used by the leading character in the series “Ironside”, played by Raymond Burr, was made here. After Sleyride closed, the premises became Martindale Mouldings in the 1970’s. They manufactured many rubber items for the automobile industry, and also made rubber bullets during the troubles in Northern Ireland. This work was kept a closely guarded secret at the time. The site has now become flats called Riverside Court.

To the right of the old cottages, was The Mill House, shown in this picture. Bishopstoke Mill can just be seen to the right. This was a grand building which reflected the status that the Miller had in the community. The 1861 census lists 3 servants, a carter and a groom living at the Mill House, as well as the miller and his family. The Mill House still exists, but has been converted into flats.

Recorded in the Domesday survey of 1086, mills existed in Bishopstoke for nearly 1000 years until, the one pictured was demolished in 1931.

In 1818 a new road bridge was installed. Earlier, In the 1500s, the miller had the right to charge a toll for anybody passing over the bridge, although there was a ford provided to the south of the bridge, for those that did not want to pay.

A.E.Woodrow aquired Bishopstoke Mill in 1895, although the Barney family owned the mill from 1848 to 1889. Sadly, The Hampshire Advertiser on September 3rd 1859, reported on the “Distressing Suicide of a Lady at Bishopstoke”. An inquest was held at the Anchor Inn on Miss Ann Barney of Bishopstoke Mills, aged 40, the eldest daughter of the late Mr. Stephen Barney. Her body was found in the water of the Mill by her brother at 06.20 am. Despite accounts by family servants, as to the mental wellbeing of Miss Barney. Mr. Fowler the Surgeon, “said that he had known the deceased for many years and had found her suffering from dyspepsis, with disorder of the nervous system. She was of an excitable temperament.” There was no reason to suspect violence and no doubt existed in his mind that death had been caused by her own act, while labouring under cerebral excitement.” The Jury returned a verdict accordingly.

The Mill was acquired by George Barton Budd in 1903

The last owners of Bishopstoke Mill, from 1910, were Shears and Chamberlain. In 1923 patent river turbines of 36” and 30” diameter, with moving guide vanes, were installed by J.J. Armfield of Ringwood. The Mill ceased operations in 1930 and the building was demolished in 1931.

This small dilapidated white corrugated iron building housed the old Armfield turbines after the mill was demolished. The tin shed was replaced as Bishopstoke’s Jubilee project in 2013. This glass encased building now displays some of the old mill workings and photographs of the old building. The turbines are still located below the floor, although they are no longer operational.

The ford, which ran below the bridge can be seen on the right of this picture. If you look carefully, there is a horse being washed in the river.

This picture is a little confusing. It seems to show a partly completed new layout, with a new bridge already constructed over the mill stream. The traffic sign warns that “Traction Engines not allowed over the New Road”. It appears that a temporary structure has been built to maintain traffic before the new bridge is built in-line with the new road. This would have been around 1902.

The same view with the new bridge completed. The old ford is visible, and now access is defined by bollards. Abandoned building materials can be seen scattered on the far bank.

Heavy traffic along Bishopstoke Road in the 1920s. The van belonged to Snelgrove’s Bakery in Spring Lane and a garage has replaced the old cottages next to the Prince of Wales.

This picture was taken in the 1920s and children are paddling in the old ford, which is clearly defined.

Paddling in the old ford was popular.

This picture from the 1950s shows where the mill once stood. The old ford was still clearly defined and the terraced cottages, in Montague Terrace, can be seen in the background.

Even in the 1960s this was where youngsters could enjoy fishing and playing in the water.

Next to the river, behind a high brick wall was a house called St Agnes. In the census of 1861, it was listed as a private Boarding School for Girl’s, run by Miss Alice Giles. In March 1867, with only eight pupil boarders and seven members of staff, Alice Giles was declared bankrupt and the school was closed.

St Agnes was a Doctors residence from the mid1920s and became the home of Dr Boyle in 1954. His surgery, opposite, was above the shop at No 2 Scotter Road. The cottage, next to the main house, became his surgery in the mid1960s.

The junction of Bishopstoke Road, Fair Oak Road and Riverside was always known as “The Mill”, but this name has now fallen out of use. In the 1950s and 1960s, this was the central hub for the bus services in Bishopstoke, with five separate bus stops serving Stoke Common, Upper Bishopstoke, Lower Bishopstoke, Fair Oak and Eastleigh.

After Dr Boyle, St Agnes became a private residence in the 1970s, although no longer enjoying the status of one of the grand houses that it had enjoyed in the heyday of Bishopstoke’s Victorian grandeur.

The property was purchased to become licenced premises with a carvery. Before development it suffered damage, by fire, which destroyed the building. Permission for a Carvery was granted on the condition that the house was re-built in the original style.

St. Agnes was re-built and converted, in the 1980’s, to become the River Inn. When it opened, replica crown jewels were displayed, said to be then worth £30,000.

The River Inn became a popular local “watering hole”. It was decorated with numerous humorous cards, pictures of local scenes, and postage stamp artwork. For children there was a large tree house in the garden overhanging the river where they could play.

Today, St. Agnes has become the Toby Carvery, still popular, but without the reproduction Crown Jewels, artwork and tree house.

Opposite St. Agnes is the channel, which is formed from a sluice gate above Bishopstoke Mill. Dr Boyle had his original surgery above the butchers shop, in Scotter Road, where the dentists is today.

The channel, of uncertain age, was constructed in conjunction with the mill stream, to control water flow to Bishopstoke Mill. This channel also provided opportunity to flood the water meadows to the south of Bishopstoke/Fair Oak Road to warm the soil and give opportunity for early planting of spring crops. The channel cuts under the road, and flows into the fields, a little way behind the horse and cart. It is still there.

Fair Oak Road, looking back towards The Mill. St Agnes is on the left, and the channel, and Scotter Road on the right. Picture taken early 1900s.

Bishopstoke Mill and Riverside. Early 1900s. A fence has been erected between the channel and Montague Road. 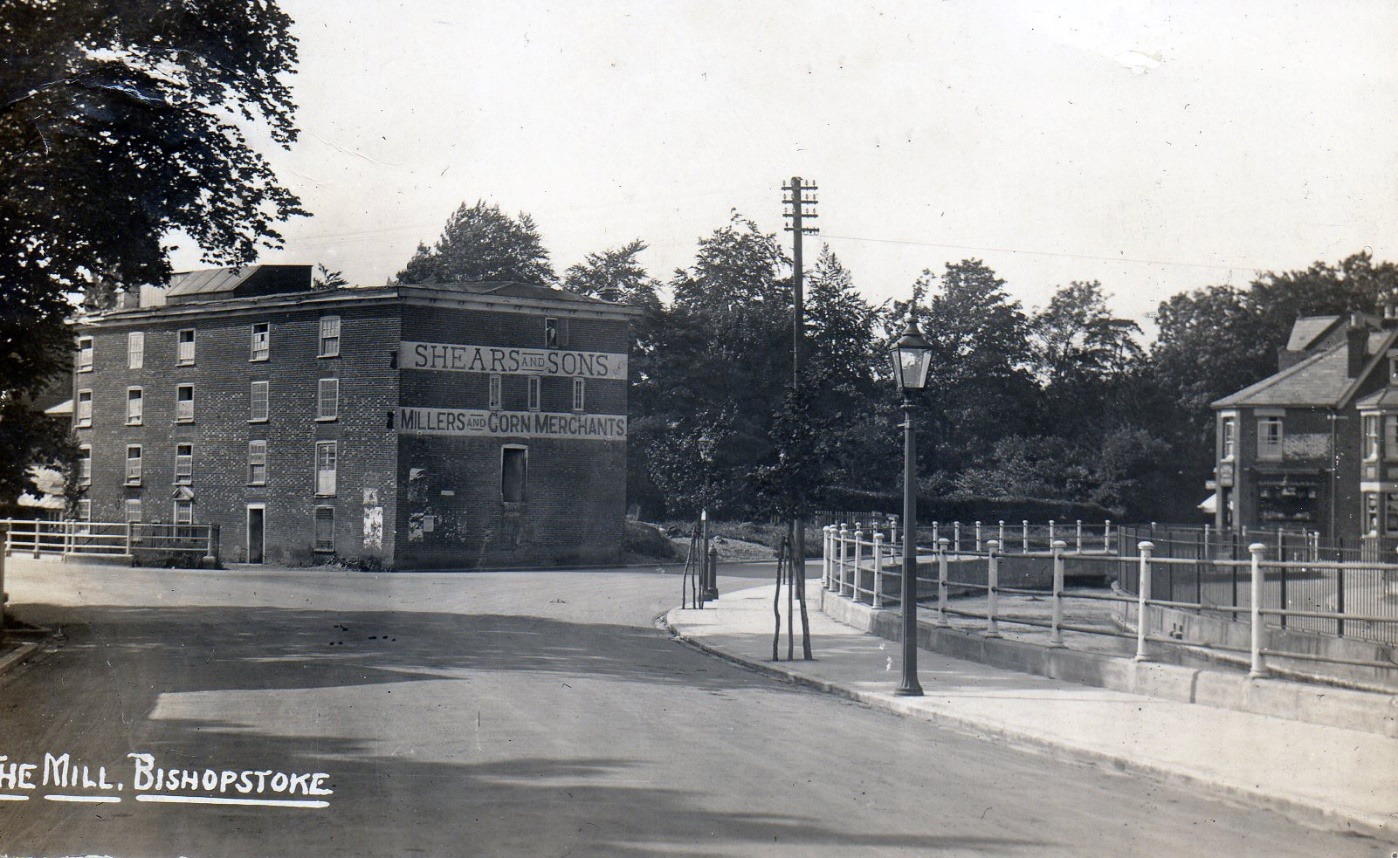 Bishopstoke Mill and Riverside in the 1920s. Railings, gas lighting and telephone services have been installed.

Looking back at Bishopstoke Mill from Riverside circa 1920. The new post office in Spring Lane (built 1906) and shops are still recognisable today.

This site uses Akismet to reduce spam. Learn how your comment data is processed.