My Memories of working at Martindale Mouldings Ltd. By Allen Guille

When I left Wyvern Secondary school in the 1970’s, I tried to get an apprenticeship at various local companies, to no avail, (only having CSE’S didn’t help) so I needed to get a job, until I decided what I really wanted to do. The local “job centre” sent me to Martindale Mouldings Limited in Bishopstoke. The factory was at 75, Bishopstoke Road between Bridgeways Service Station owned by R. Moody (now the car wash site) and Mill house (now made into flats). The building on the right of the mill stream pictured in the old postcard was originally a factory, called Sleyride Ltd. who were Electrical Chair Manufacturers. They made a variety of wheelchairs here in the 1960s. We have been told by the son of the owner, that the wheelchair used by the leading character in the series “Ironside”, played by Raymond Burr, was made here. After Sleyride Ltd. closed, the premises became Martindale Mouldings Ltd. in the 1970’s.

In this old postcard of the Millstream, the building on the right, where the boys are, became Sleyride/Martindale Mouldings. 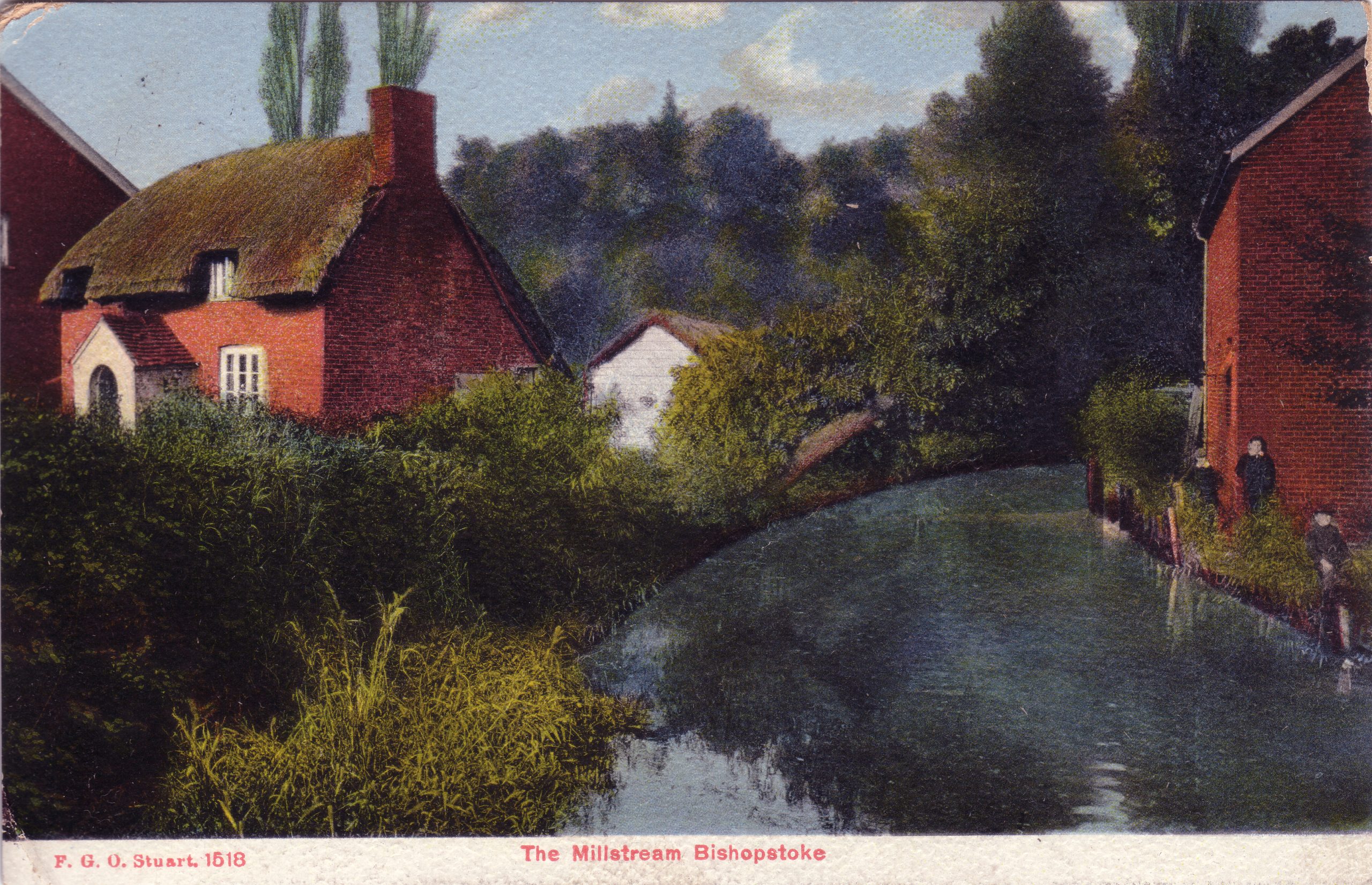 So along I went to enquire about a job, when asked where the office was, I was told by a long-haired “greaser”, we don’t want skinheads working here. (I wasn’t a skinhead) After a brief interview, I got the job (they must have been desperate) I was shown to the shop floor and shown how to work a press, similar to this one in the picture, although there was an extra platform in the middle on the one, I was to learn on. 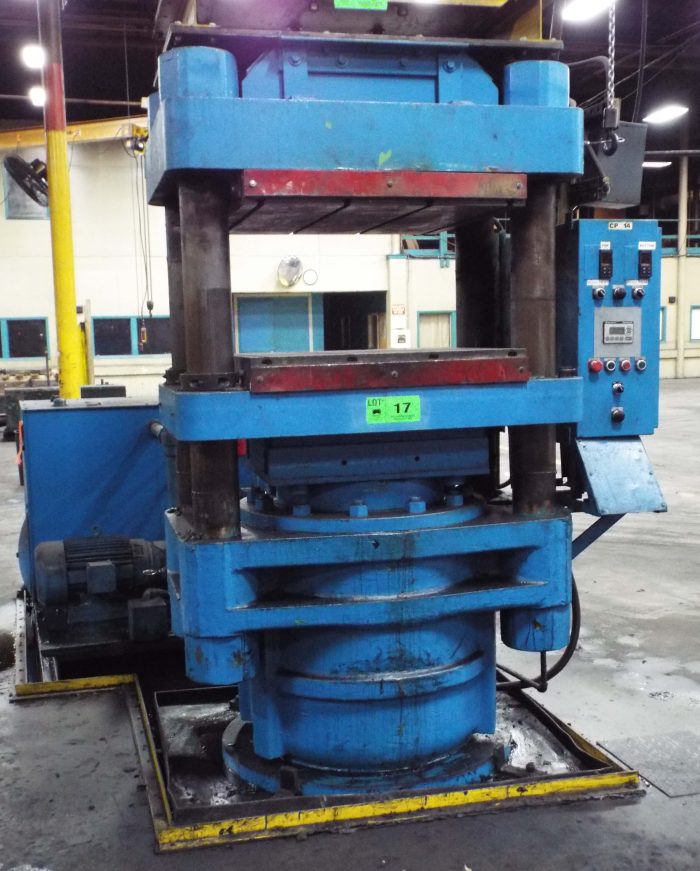 The first thing I noticed was the smell of “cooking rubber” it was horrendous (no masks in those days) I was told you’ll soon get used to it and I presume your sense of smell became immune to it, but your cloths still stunk (no overalls in those days). 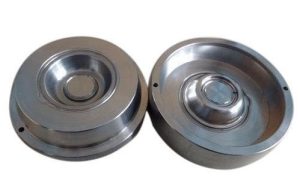 This press had heated platforms, top, middle and bottom. Cut to size strips of rubber were placed into a mould, the lid placed on top with locating pins, press the button for the hydraulic ram would open and close the mould between the heated platforms, these would heat up the rubber and make it flow into the shape. You had three moulds, one would be on your bench and the other two in the press, top and bottom. You had a timer and every 5 minutes, you would strip the mould on you bench, putting the product into a box and reloading the mould again ready to swap with one that had been “cooking” in the press. When the time was up, you undid the valve to release the pressure and lower the ram, take out the next mould, trying not to burn your wrists, we had heat proof gloves but no protective sleeves, you put the hot mould on the bench and put your prepared mould into the press, pushed the button to raise the ram, this squeezed the mould together, making the rubber form into the shape of the mould, you release the pressure a couple of times to let the air out of the mould to hopefully get rid of air bubbles.

You had to be careful lining up the top and bottom of the moulds, because if they were slightly out, the locating pins would not line up and this could damage the mould and they were very expensive to buy, as they were made especially for the product. You set your timer and opened the mould on the bench with levers and used a high-powered air hose to lift the rubber moulding from its mould, inspect it and put it in your box, under the work bench. To load the mould up again, you first coated the hot mould with a coating of water and washing up liquid, to hopefully make the releasing of the rubber moulding easier, when it had cooked. Load the mould with the cut lengths of rubber, place the top half on the bottom part of the mould, making sure the locating pins lined up. Using 3 moulds on a 15-minute cycle, you should make about 30 pressings per mould per day.

There were about seven different rubber moulding presses of various sizes, on the “shop floor” that manufactured many rubber items for the automobile industry, puncture repair patches for tubeless tyres, white rollers for mangles on top of washing machines, scuba diving flippers, snorkels, we also made rubber bullets during the troubles in Northern Ireland. This work was kept a closely guarded secret at the time, for fear of reprisal. 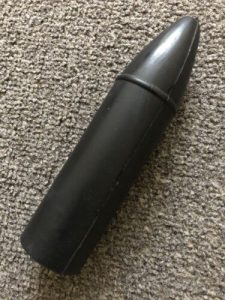 Upstairs the ladies would trim the “flash” from around the mouldings (the excess rubber squeezed out from the moulding process) these were brought up to them from our boxes under our benches. 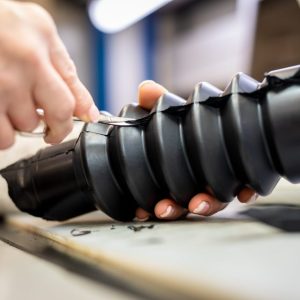 Another dirty job was to sandblast metal parts that went inside the rubber mouldings to ensure the rubber stuck to the metal. This job was usually done on overtime.

There was a coffee machine that usually gave you a cup of hot water and no coffee. You could get a free coffee by using a “L” shaped piece of wire and sliding down the inside of the machine to find the lever that the money would have tripped the switch and swiped down to replicate the coin. You had to be careful as to go too far down or you could get an electric shock. Lunch time was a trip round to the “Oven Door” Bakery shop (now the Kashmir Tandoori Indian takeaway) that was next door to the Butchers shop, my lunch was usually a sausage roll, a cake and a pint of milk. 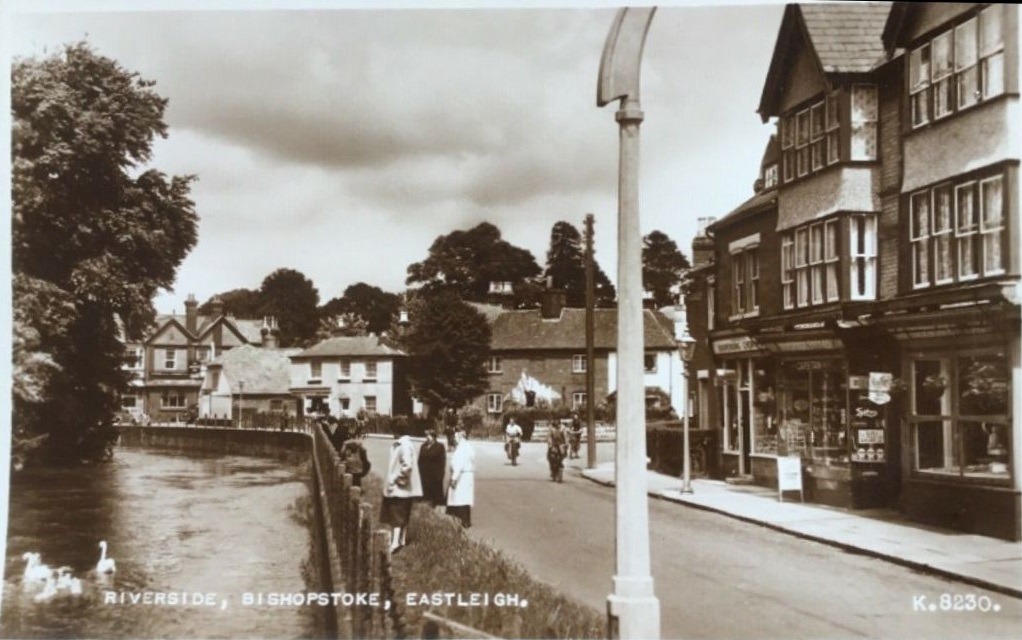 Then round to the “old rec” for a football kick about before back to work or maybe a trip to the “bookies” (where Riversides Vets is today) to put on a low bet accumulator. 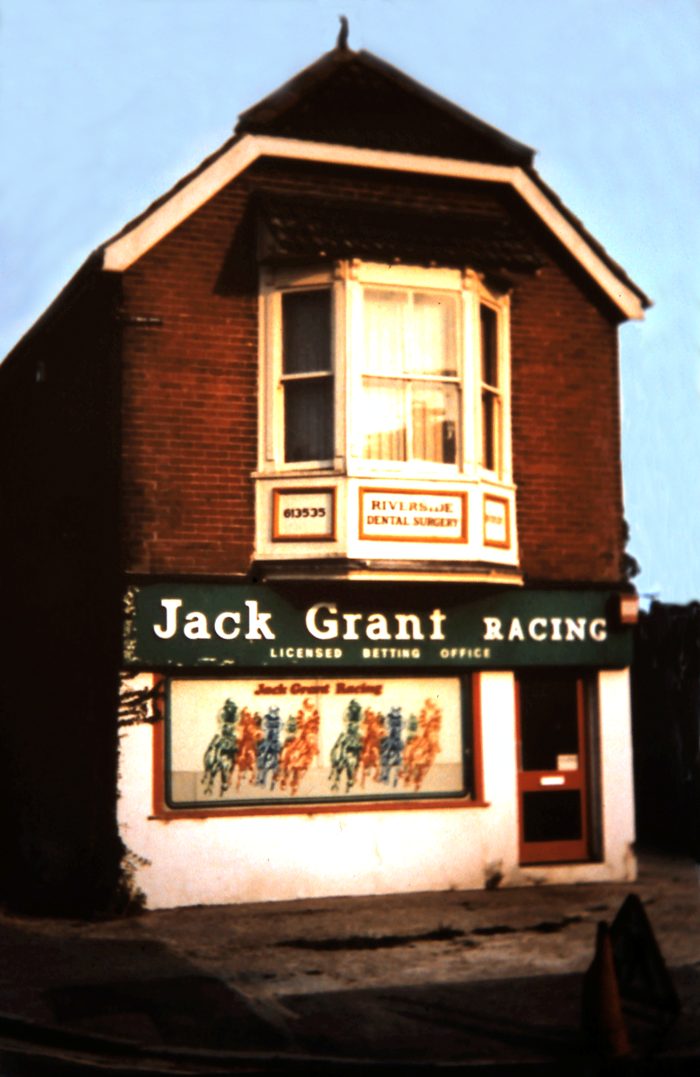 There was usually a hours overtime each day (except for Fridays as that afternoon was spent in the Prince of Wales). 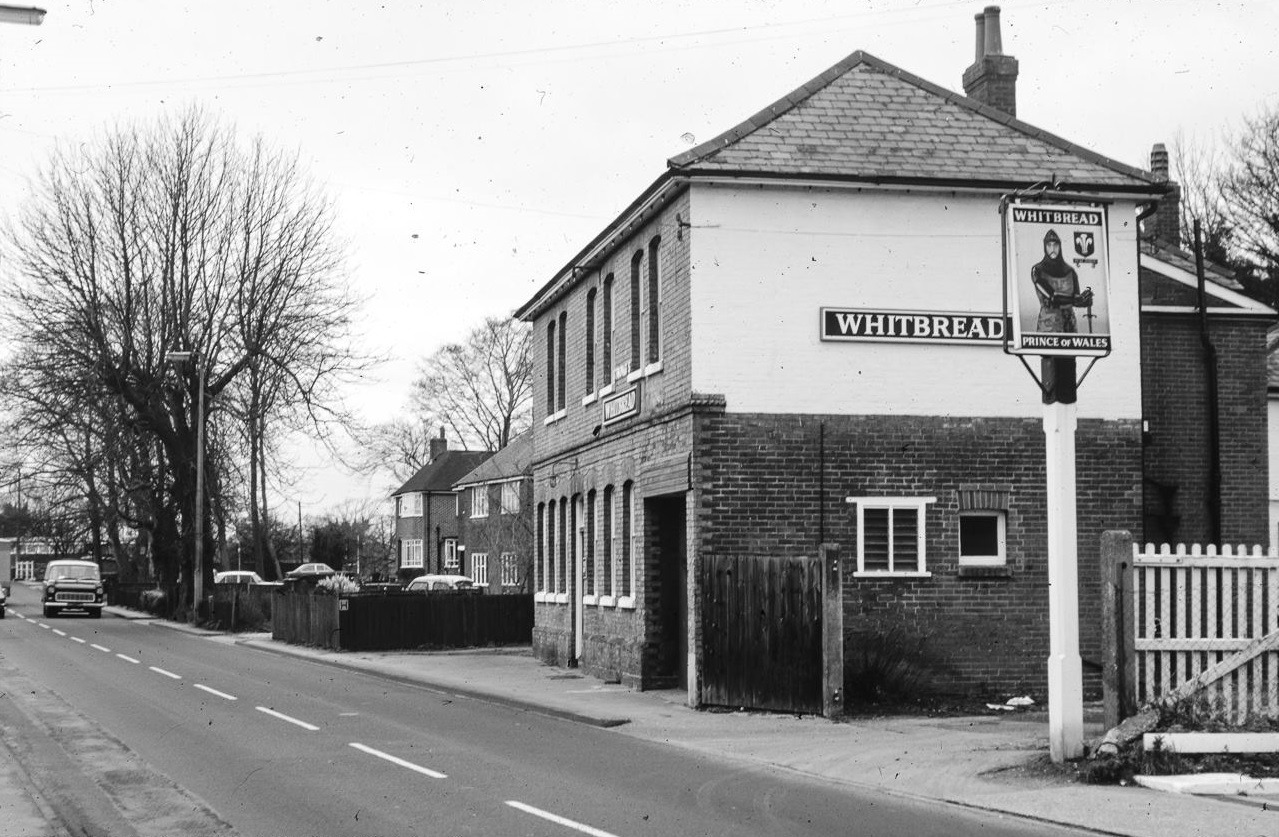 The radio was always on and turned up loud, especially when a song by T-rex or David Bowie came on. The factory was hot in the summer months, but nice and warm in the winter. Some of my workmates who were there at the time were, Charlie Windsor, Colin Jacobs, Dave? (lived in Shears Road) and Andy? (from Swaythling) 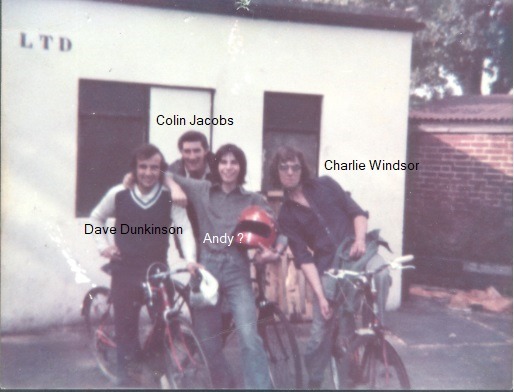 Wages weren’t great, but I probably was earning slightly more than being an apprentice. I did now earn enough to get a Lambretta scooter and eventually saved up for my first car, a Ford Cortina Mk.1 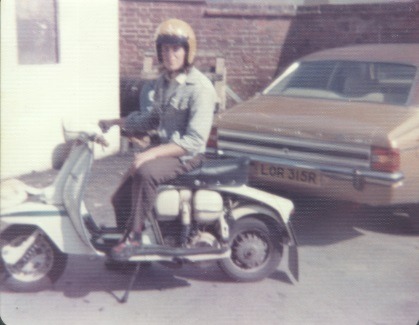 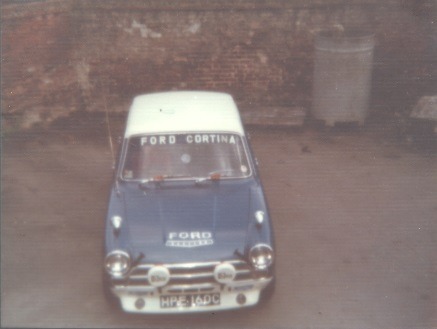 So, after seven years at Martindale Mouldings, it was time to leave as I needed to earn more money. My mate got me a form to apply for a job at the Ford Transit factory at Swaythling. I went for an interview and a week later got a letter telling me to report at the factory on Monday morning to start. This didn’t go down to well at Martindale mouldings, as being there for seven years, you had to work your notice, but I was determined to go, so I left. I spent 31 years at Fords, taking the redundancy package in 2009, but that’s another story.

The Martindale Mouldings factory was mysteriously destroyed by fire and the site rebuilt into flats called Riverside Court. 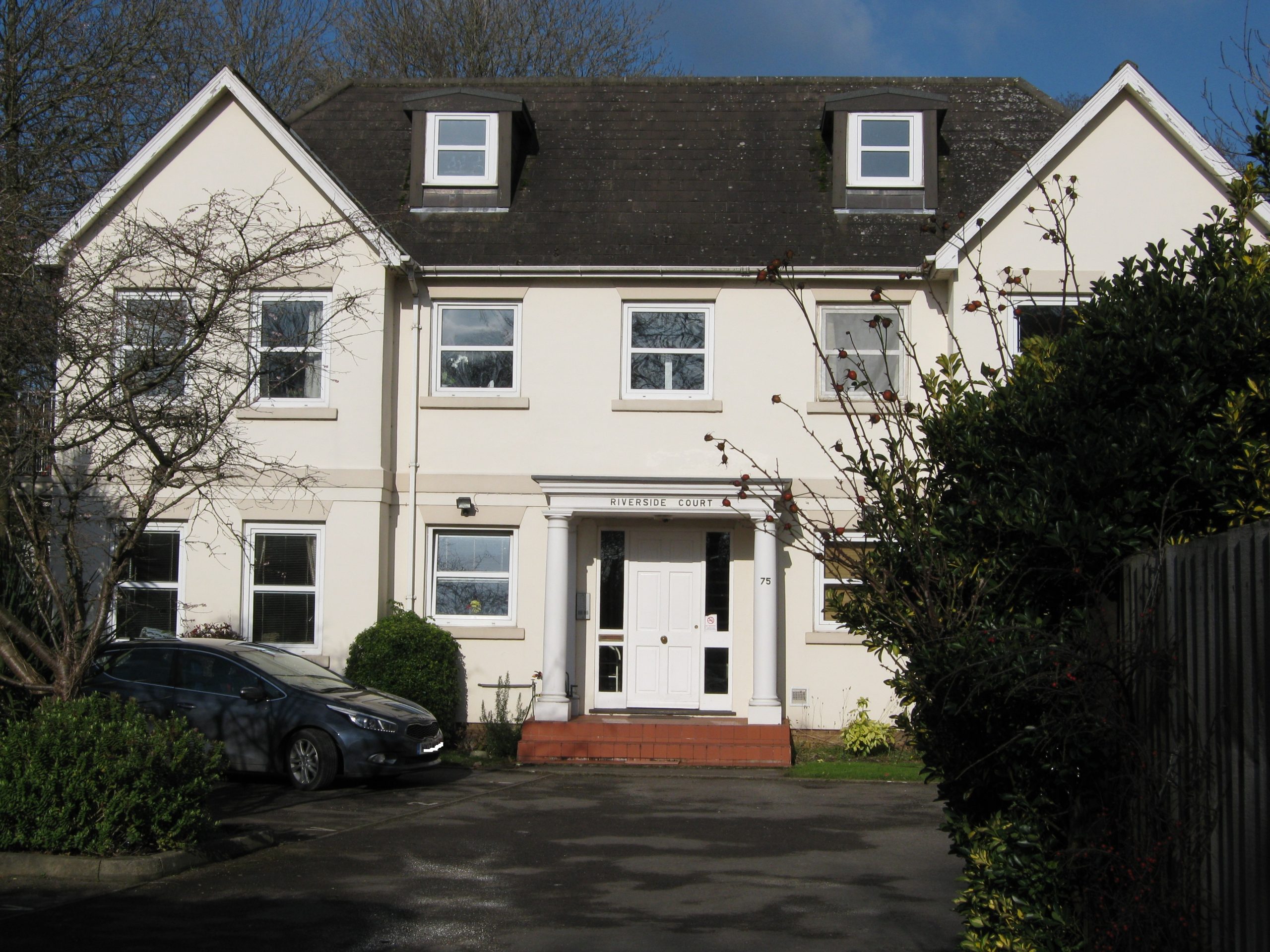 Rubber products that were manufactured at Martindale Mouldings Limited 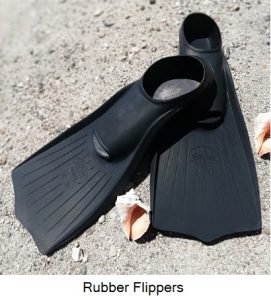 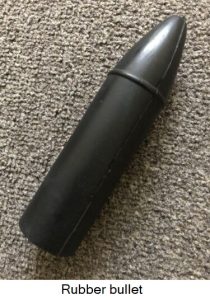 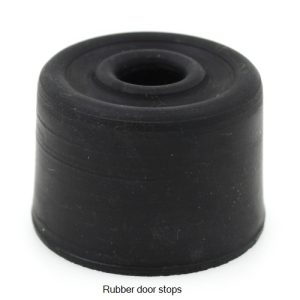 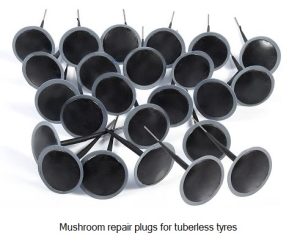 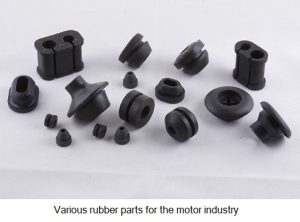 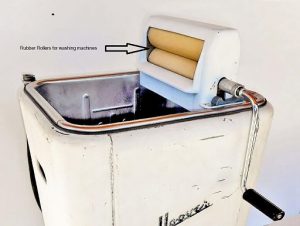