The Poor House of Bishopstoke 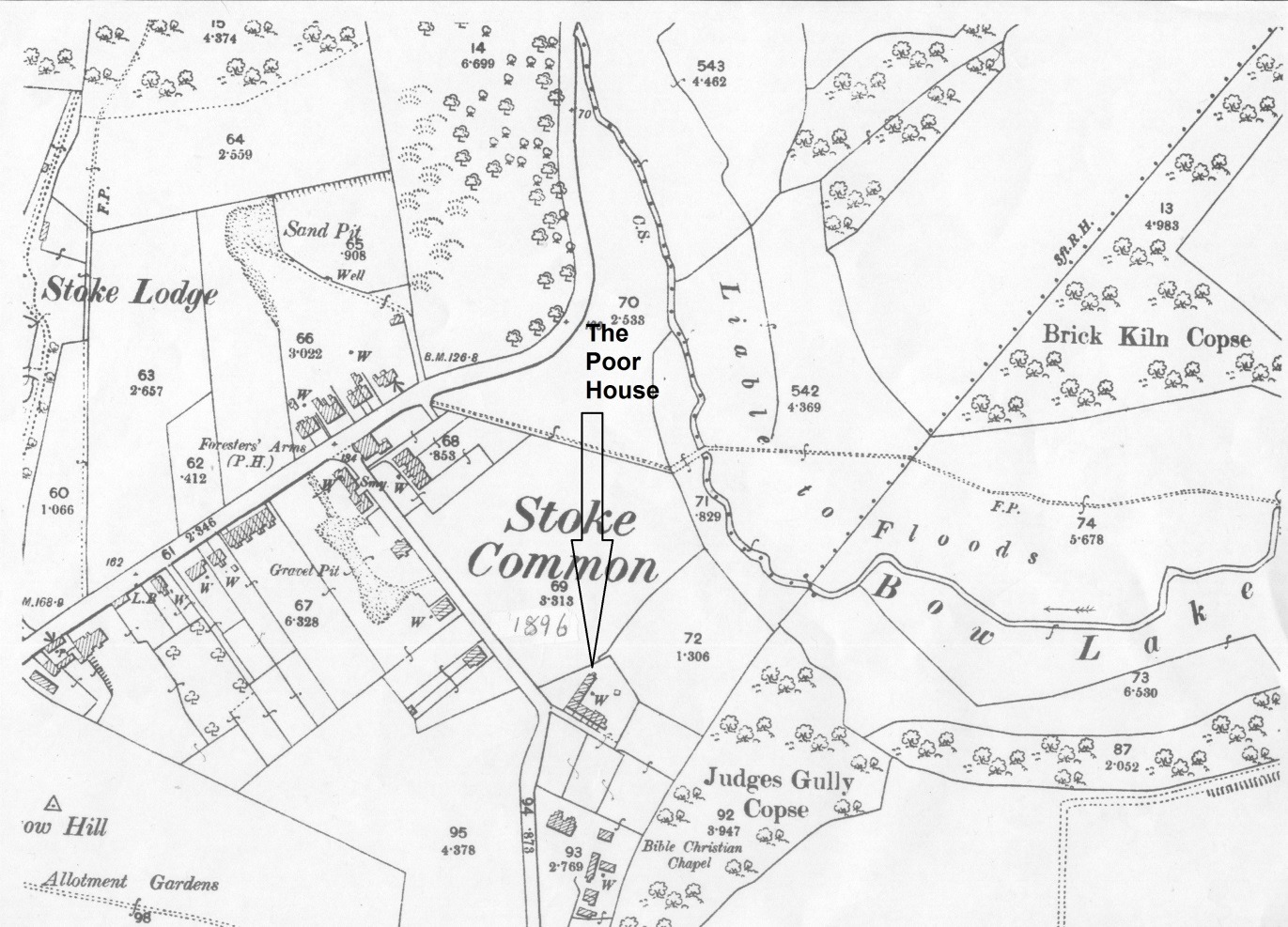 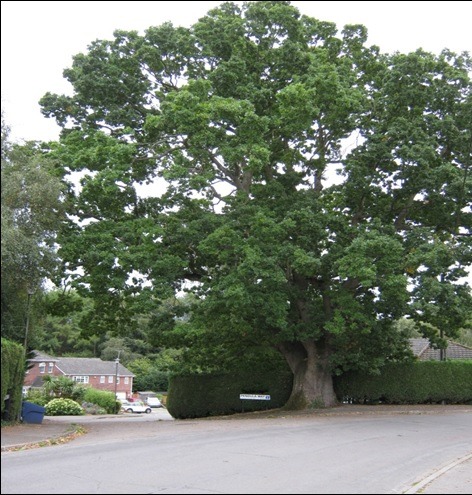 This building was to take in some of the destitute poor of the parish, who in turn for board and lodging and “decent apparel” would be set to work to earn their keep.

It is probably no coincidence that the Vestry Committee chose to build it as far away as possible from the rest of the community.

The committee had to organise not only the building of the poor house, but also the furnishings, Chairs, bedsteads and sacking, beer stand and “equipment “, 1 copper kettle, 1 tin kettle, 2 dozen wooden spoons, 27 yards of Scotch sheet and 40 yards of hessian. Mindful of the need not to over spend, because the building had to be raised by a loan, they brought “ an iron gate “ for 10 shillings and an old grate for 7s 6d. 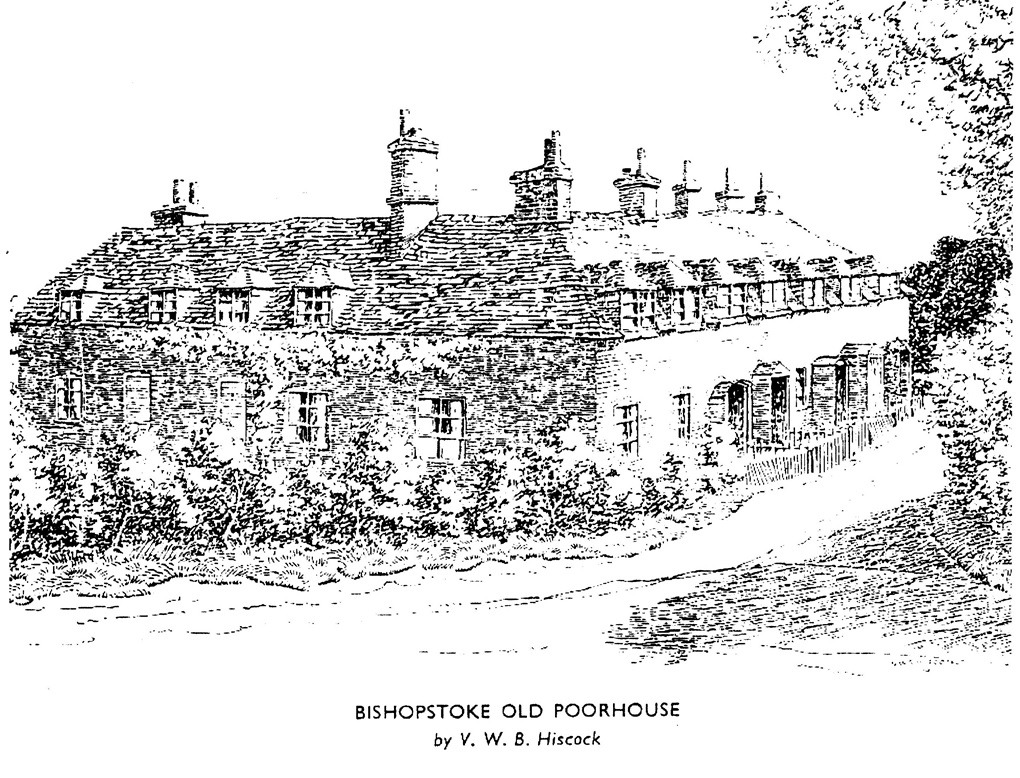 The two men in charge of the poor house and its occupants were Samuel Lovedee , a sack maker and his son Samuel Lovedee junior of New Sarum ( Salisbury) Wiltshire. They agreed to maintain and clothe the poor for three years in return for £157. 10 s a year from the church wardens, plus the benefit of the labour of the poor lodged there.

Surgery and medicines for any sick people were to be provided by the churchwardens, but the Lovedees were to bear the cost of burying any that died.

The clause making those responsible for the running the poor house to pay for the burial of their residents out of their own pocket was a strong incentive to ensure that as far as practicable, occupants of the poor house were reasonably well nourished and cared for. 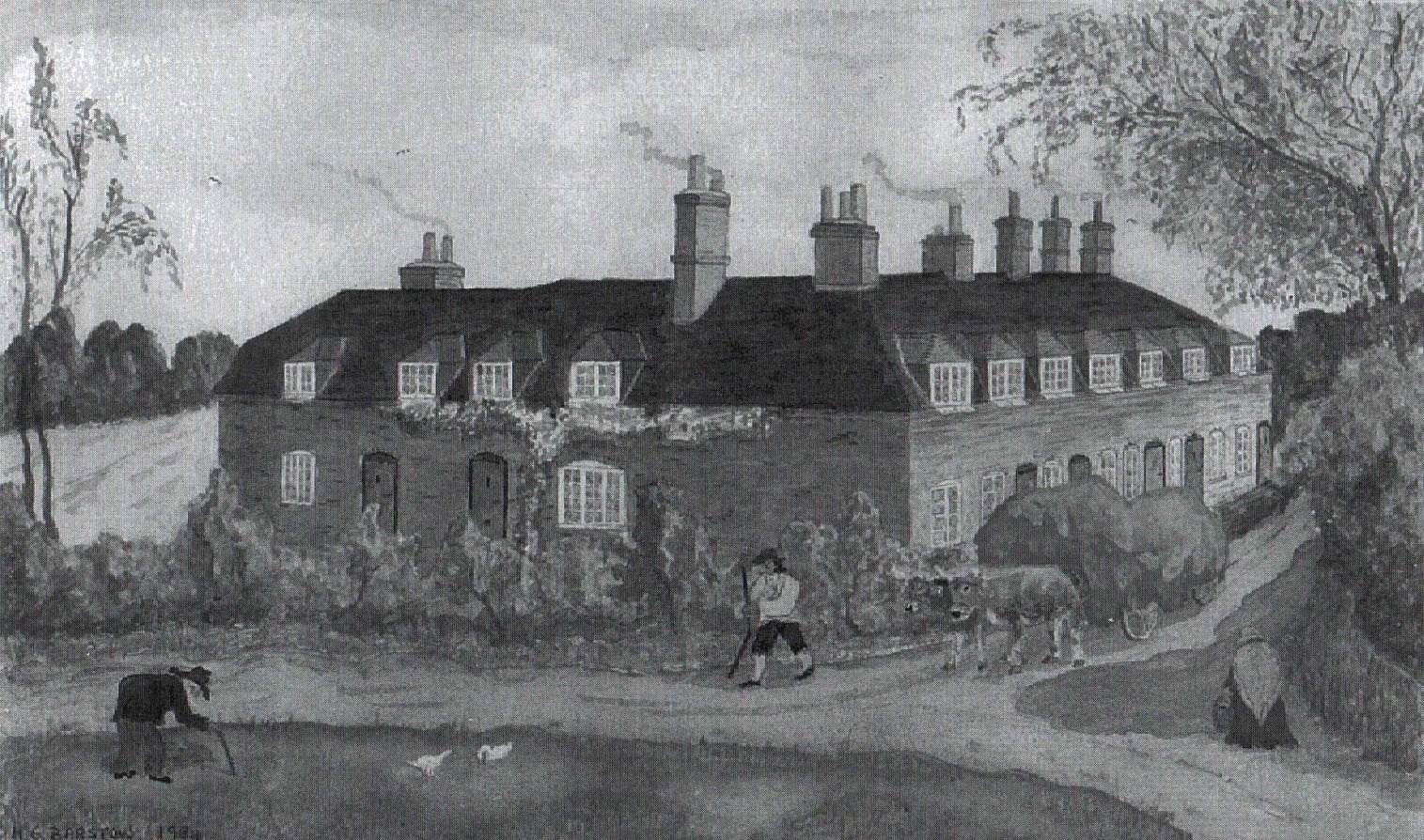 In the local paper in 1840, was this announcement, To be sold by auction at the Anchor inn, on orders of the Poor law commissioners, buildings recently occupied as the House of Industry, together with garden, orchard and paddock of 2 acres, a Quadrangle of brick and tile buildings, 71 foot frontage, could be converted to 2 or more buildings or with some outlay could form a respectable residence. 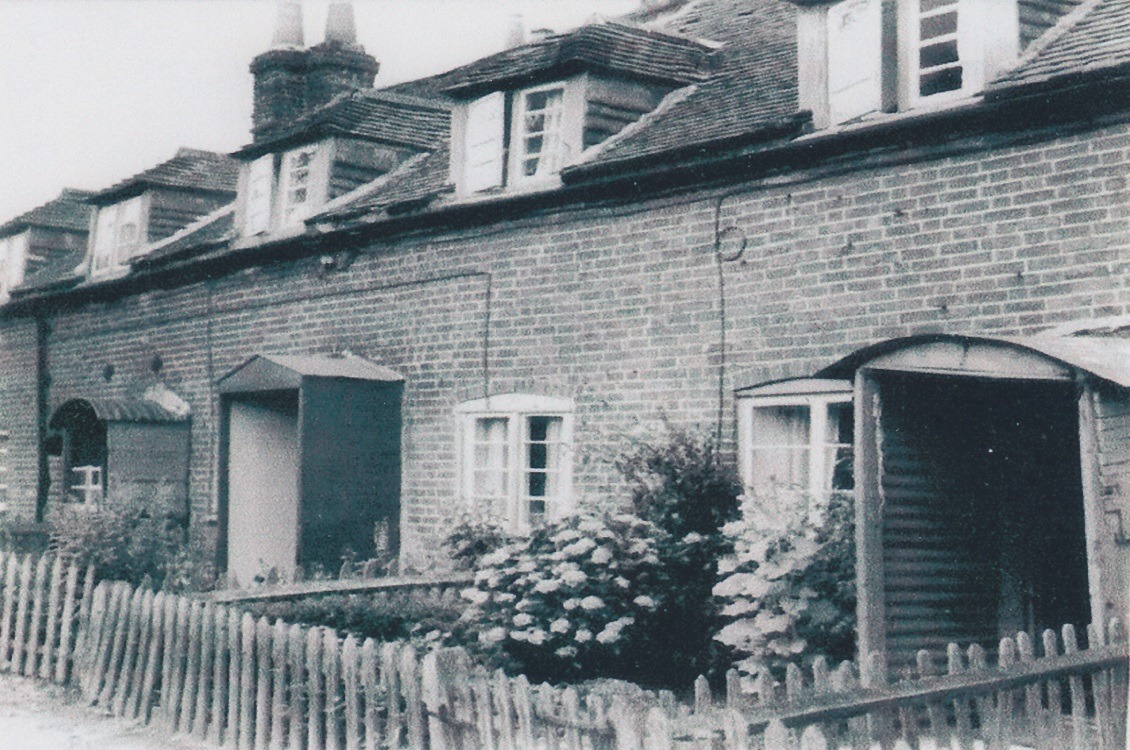 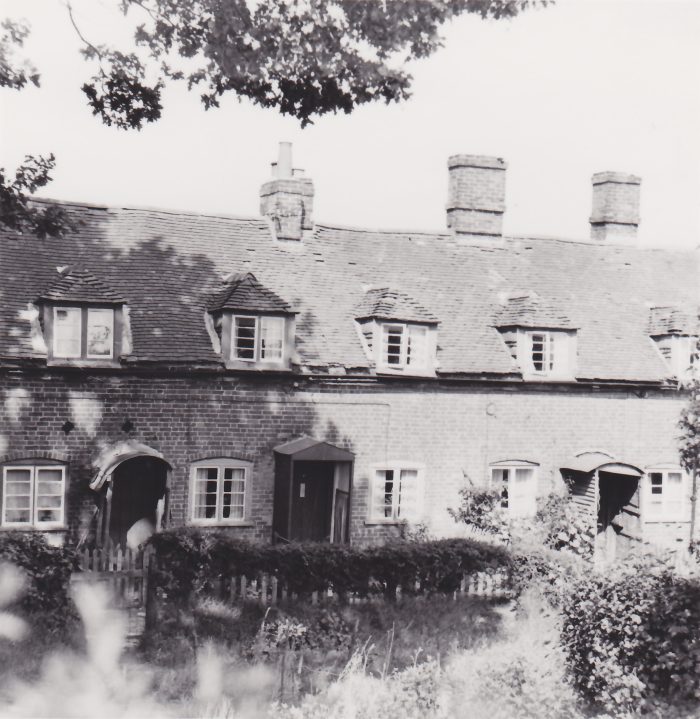 The building was converted into 5 cottages on one side and three on the other into an “L” shape. Mrs Pike one of the residents recalls there was no electricity, one cold tap outside all the cottages, these had replaced the well that used to be the water supply. The bath was kept in the garage across the garden and water heated up in a boiler, emptied into the bath and cold water added. After the bath was finished, the water had to be emptied out by the bucketful. The loo’s were in sheds at the bottom of the gardens and ran into cess pits, as there was no main drainage in the top end of Church Road and Stoke Common until the 1960’s. There were 2 rooms downstairs, Kitchen, living room and two rooms upstairs. The stairs lead straight into the first bedroom and at the bottom of the stairs lead into the kitchen. This was one of the larger cottages. In one of these 4 room cottages Mr & Mrs Sheehan raised twelve children. Descendants of the family still live in the village. The cottages were finally condemned and pulled down in 1959, as they were deemed unfit.

In the foreground you can see there was a track in front of the cottages and across that were the gardens. In the gardens, flowers and vegetables were grown and chickens were kept. Here’s where the loos were situated, no inside ones, it must have been very cold in the winter months. You would not have wanted to hang around outside for too long. 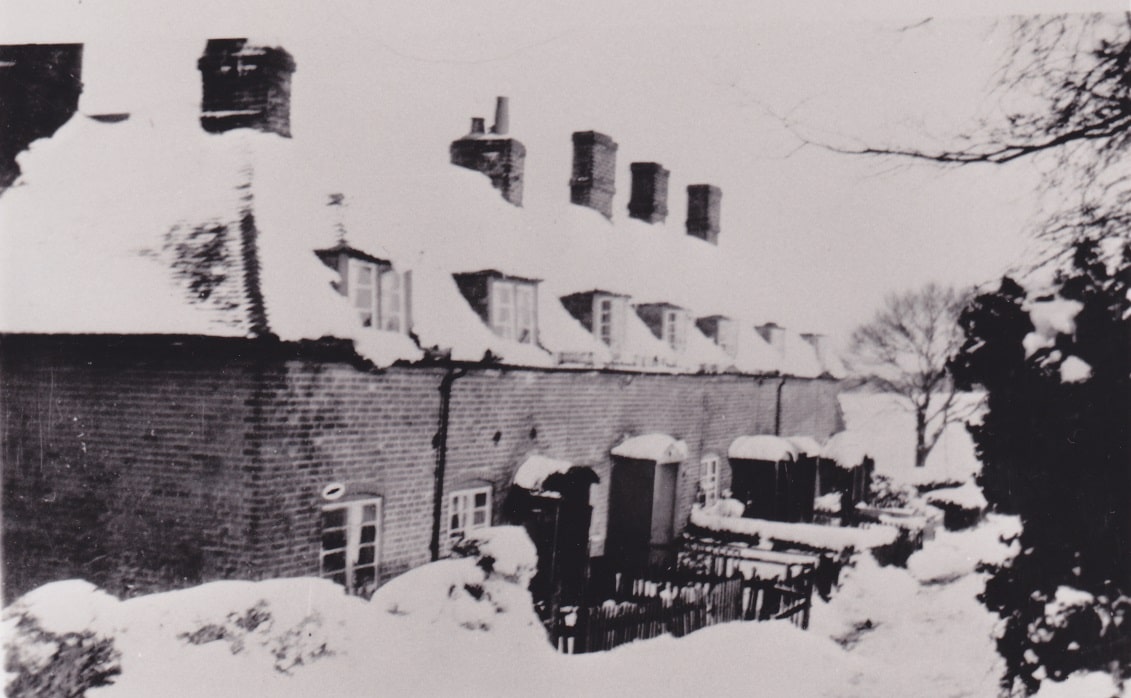 Eva Page, who lived in the poor house recalls in her Reminiscences of my childhood, that the girls had wooden hoops and the boys, iron ones with a skimmer, these were made by Mr Woodford, the blacksmith. Also the Woodfords, sons and daughters attended the chapel, and once a week there was a Band of Hope meeting. 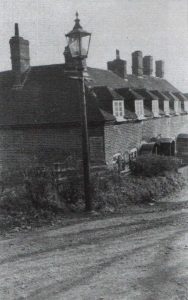 The blacksmiths brother, walked around the village, lighting the gas lamps with a long pole, he did it every morning and evening for years.

On Christmas morning about 6.00 am, the chapel choir would visit the houses in Stoke Common carrying lanterns and sing carols. 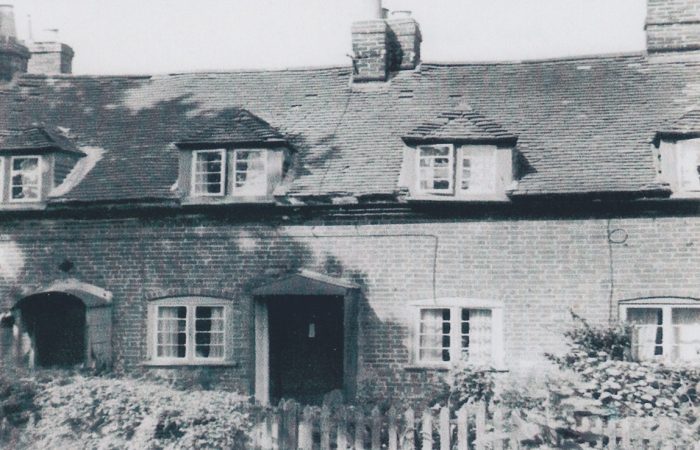 This is number 79, Stoke common road, my mother’s family “ the Nevitt’s” lived in these cottages during the Second World War. They had been living in Guernsey, but had to leave as the German army advanced through Europe. They were rehoused, firstly at Gosport, but had to leave here as the bombing of Portsmouth intensified, and relocated here. This little 3 bedroom cottage housed a family of 5, which became 6 when one of my uncles was born there and when the boys returned from Greenwich Royal naval college on leave they had to sleep top to tail because of the lack of space and their father had to sleep in the shed. My mother tells the story of their bad tempered cockerel, that would frighten the young children and would not let them pass every time they wanted to use the outside lavatory. 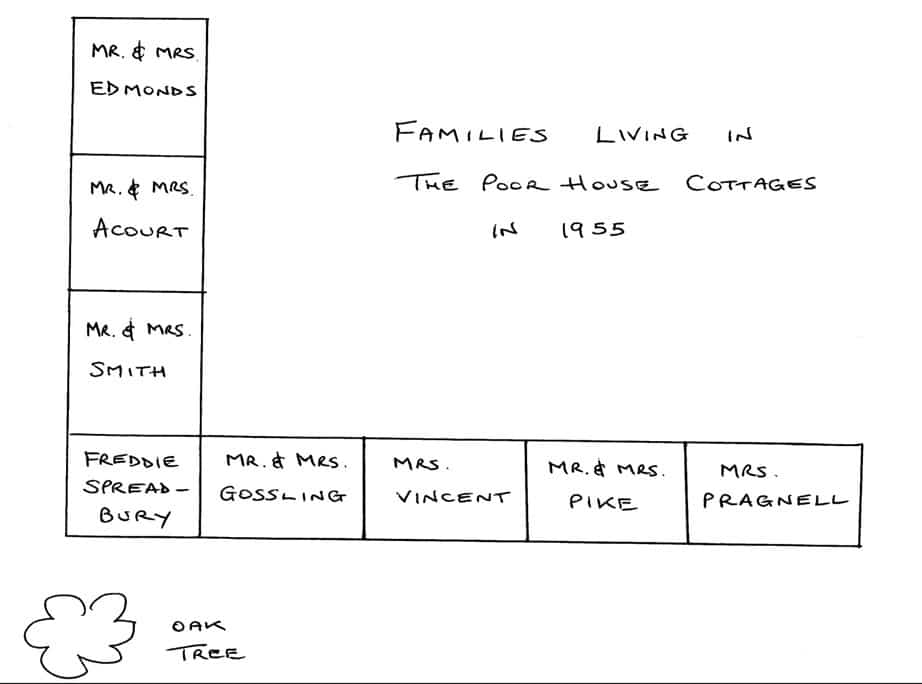 This drawing shows the names of some of the last residents in 1955. Some of these surnames, Acourt, Spreadbury, Pragnell and Pike are still resident in Bishopstoke today. 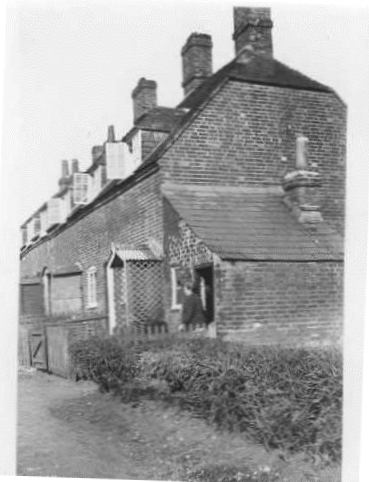 The lady in this picture is Mrs Pragnell outside her cottage.

The cottages were finally condemned and pulled down in 1959, as they were deemed unfit.