The History of the bells of St. Mary’s, Bishopstoke.

There has been a Saxon Church on this site at Riverside, but little is known of it. The old Church was probably destroyed when the Danes invaded the district in 1001. 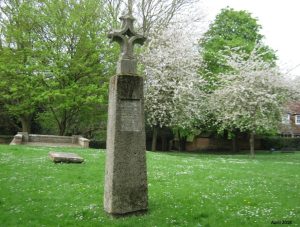 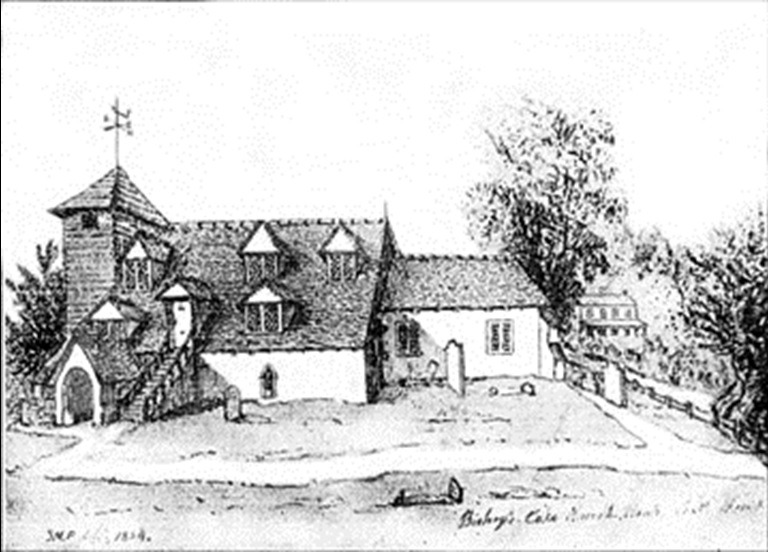 This sketch is of a church which stood on the site near the River Itchen, prior to 1825. The church is shown with a wooden tower, dormer windows in the roof and steps leading up to an entrance above the ground floor, probably leading to a gallery. This church fell into disrepair and was demolished to make room for a new one in 1825. 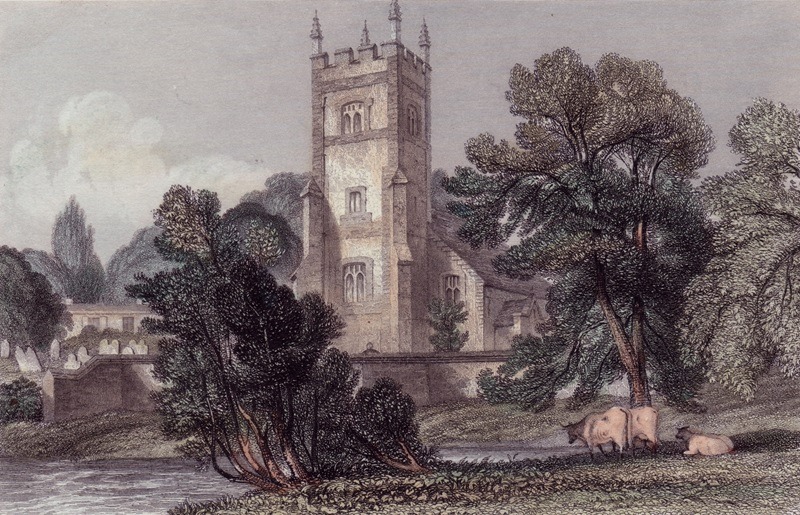 A new Church was built in 1825 by the Rector Thomas Garnier.

These 3 Medieval bells were in the old St. Mary’s Church at Riverside. 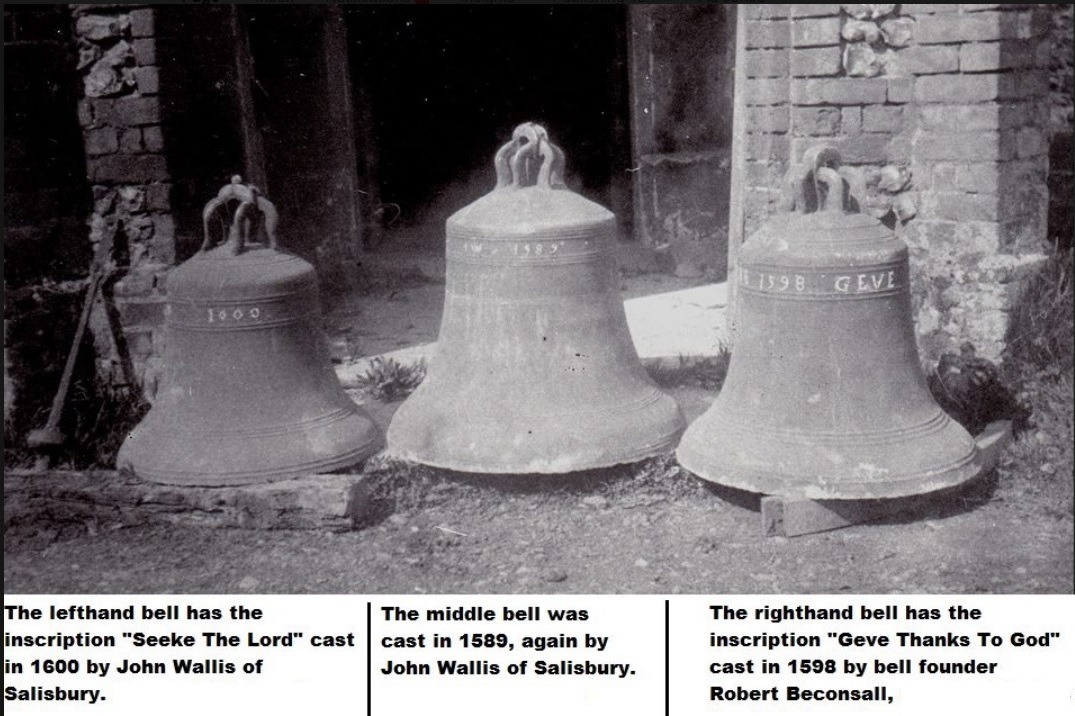 These bells were removed from the ”old” St. Mary’s Church at Riverside, when this Church fell into disrepair and taken up to the “new” St. Mary’s Church built in 1891/92, opposite the Infants School in Church Road. These bells must have been stored here as there had been insufficient money raised to build a bell tower. 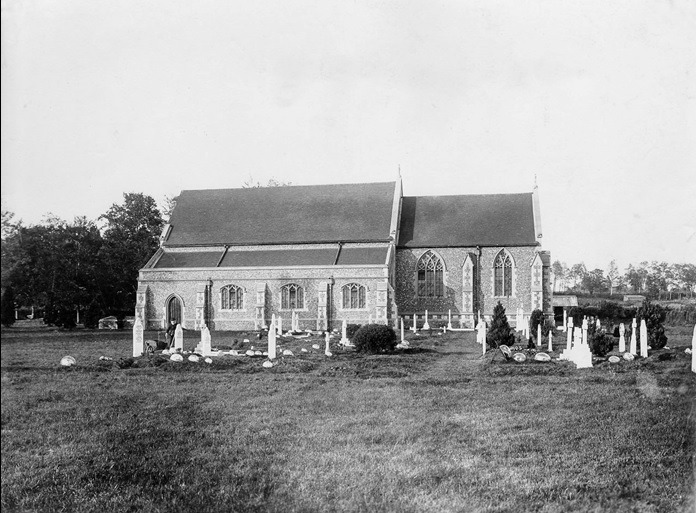 The money was raised for the bell tower and was added to St. Mary’s Church in 1909. 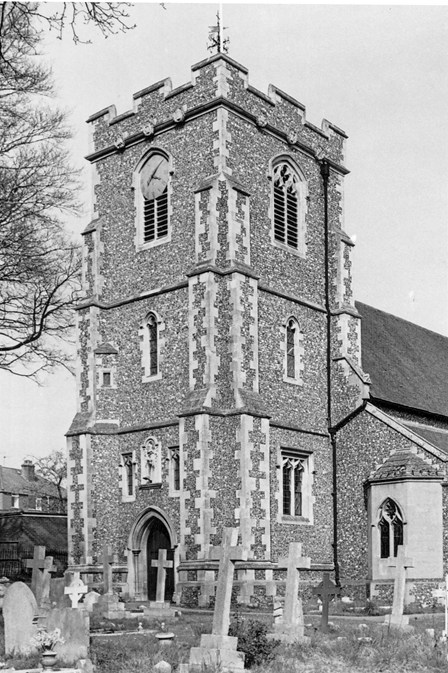 The new tower was dedicated as a memorial to the Hon. Sir Henry Keppel who served as Church Warden 1889-1895.

Henry White was a church warden at St. Mary’s. He donated two new bells to be added to the three 16th century bells from the old 1825 church to make a ring of five bells, 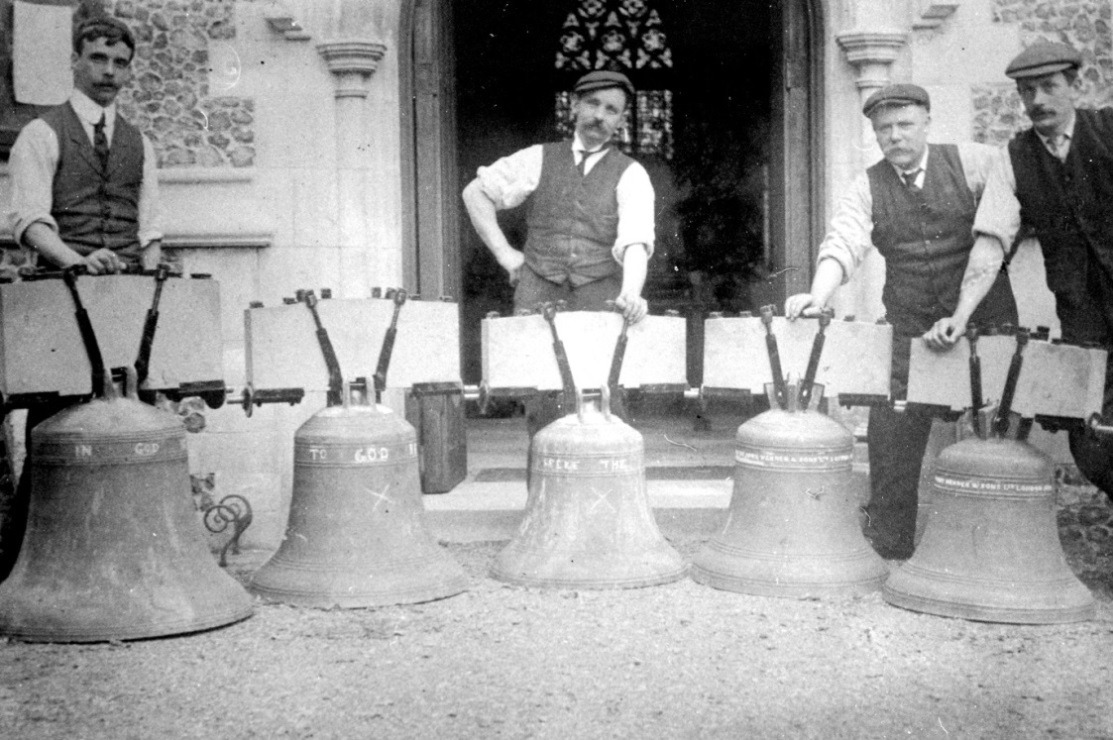 These were hung in the newly built tower of St. Mary’s church by the bell hangers in the photograph and rung in public for the first time on the occasion of the wedding of Henry’s eldest daughter, Alice, on June 24th 1910.

So we now have a bell tower with 5 bells, all we need now is some bell ringers!

A meeting was held at St. Mary’s Church on May 18th. 1910 in attendance were the Rev. S.N.Sedgwick, Mr. Titcombe, Mr. Collyer, Mr. Ayliffe, Mr. Winterbottom, Mr. Smirk, Mr. Tucker, Mr. George and Mr. Hutchinson. They were going to practise bell ringing at North Stoneham Church in preparation for opening those in the Bishopstoke tower.

These are the original minutes of the first meetings 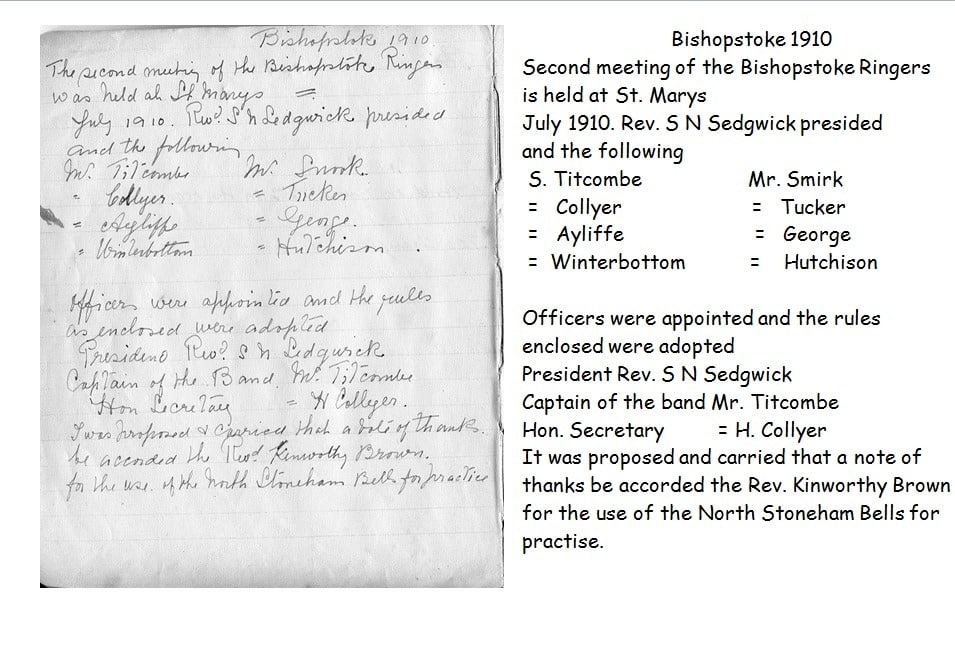 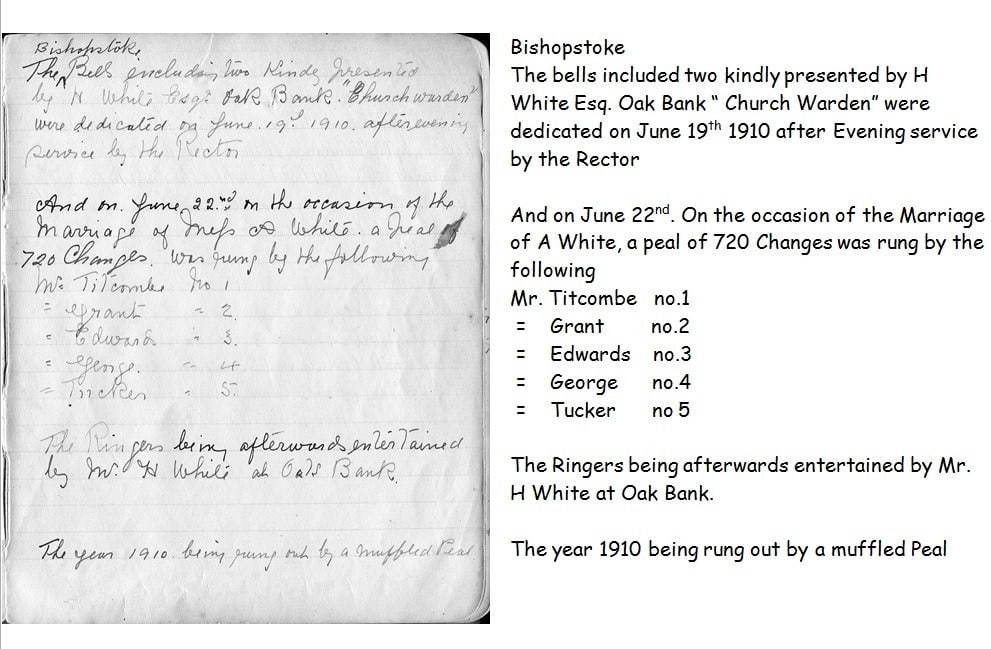 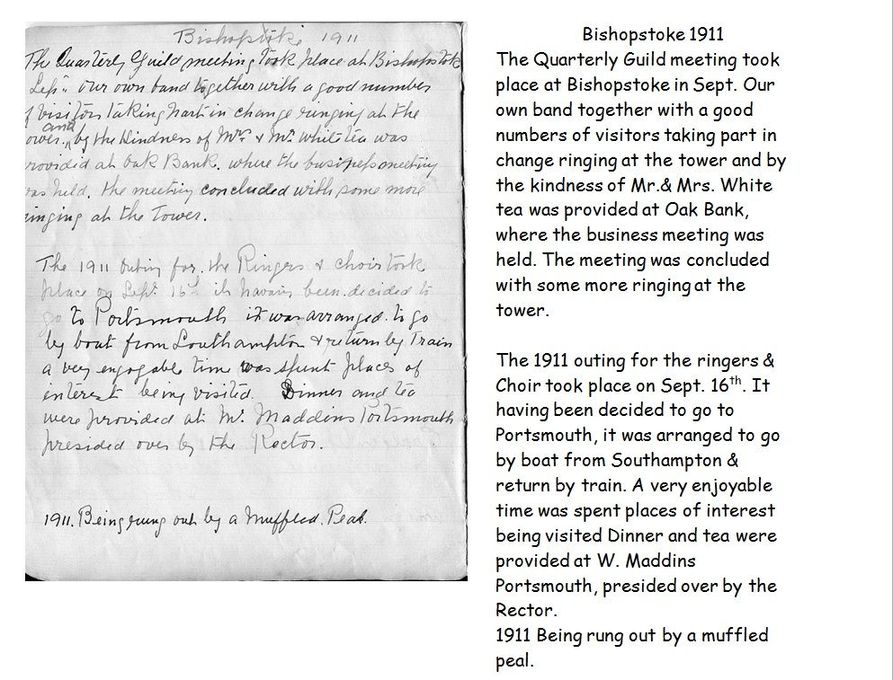 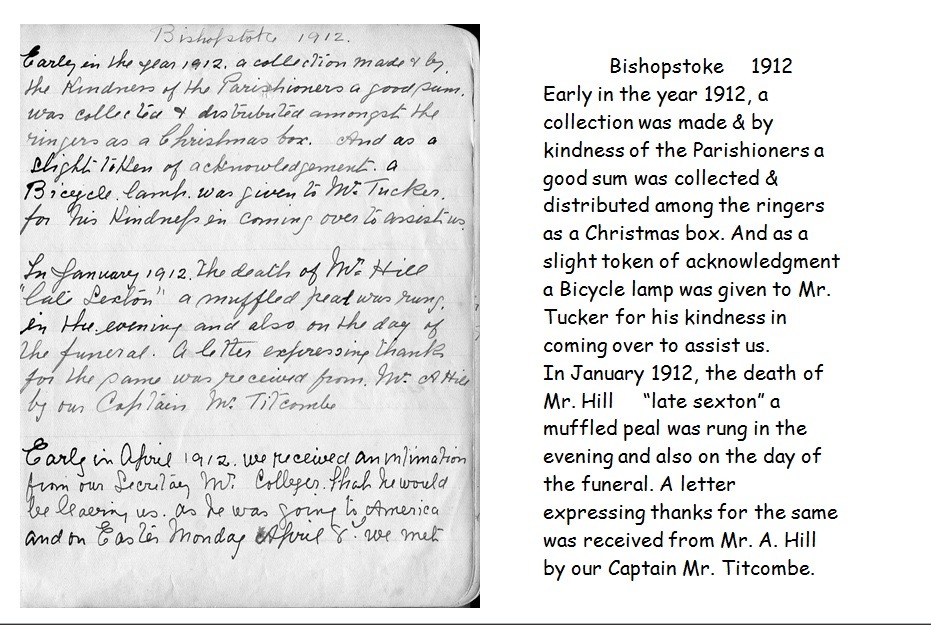 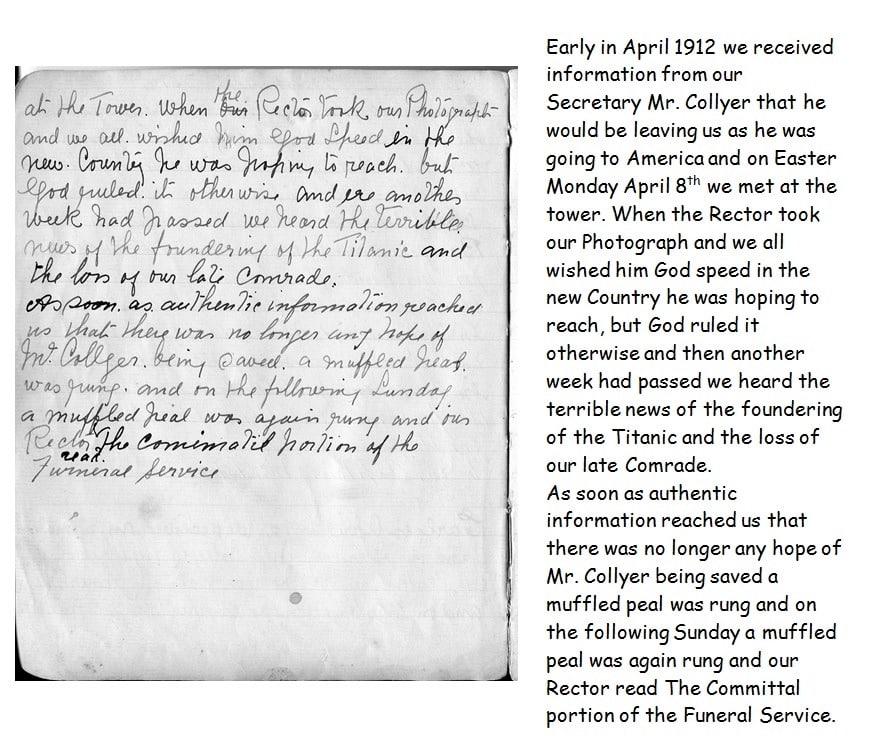 This is the photograph taken by the Rector of the bell ringers, as mentioned in the minutes above. Harvey Collyer (far right) then left for American on the RMS Titanic and he was lost at sea. 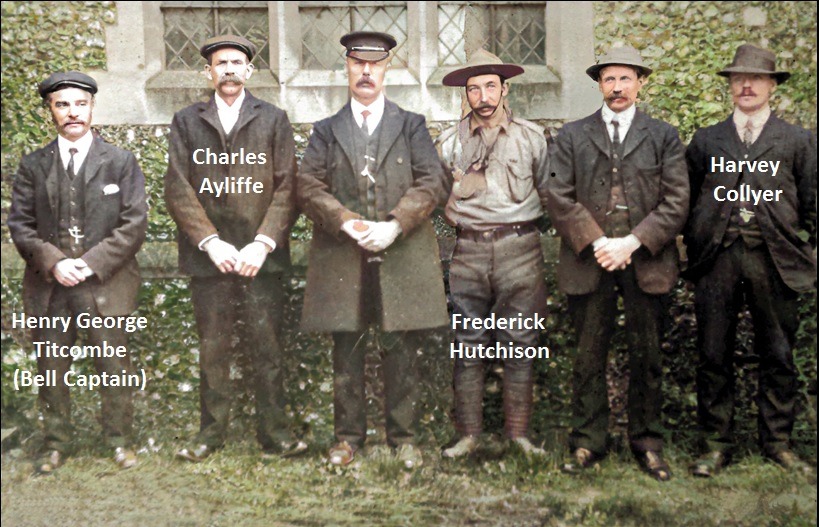 The Harvey Collyer memorial with plaque inside St. Mary’s Church. 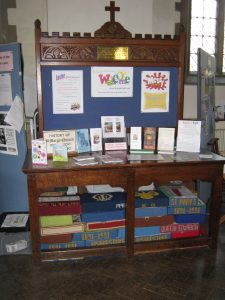 Three more bells were added in 1920/21. The tenor bell was called “Remembrance” and was cast from three clock bells from the Southern Railway Carriage works in memory of the Railway men who died during World War 1. This bell was very poor toned. Soon after installation it was quietly removed, returned to the Llewellyn & James bell foundry in Bristol and recast. 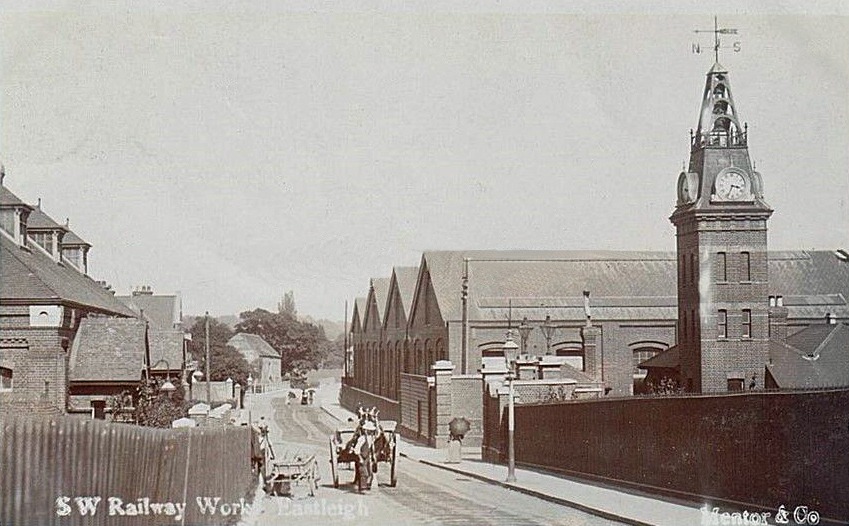 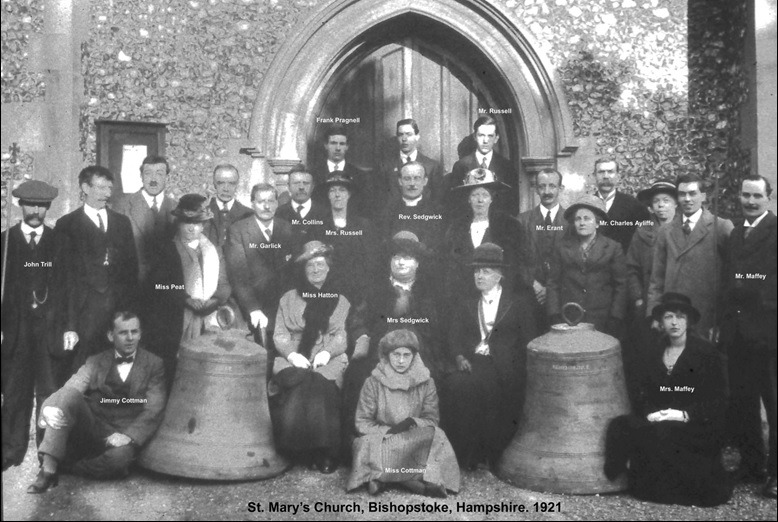 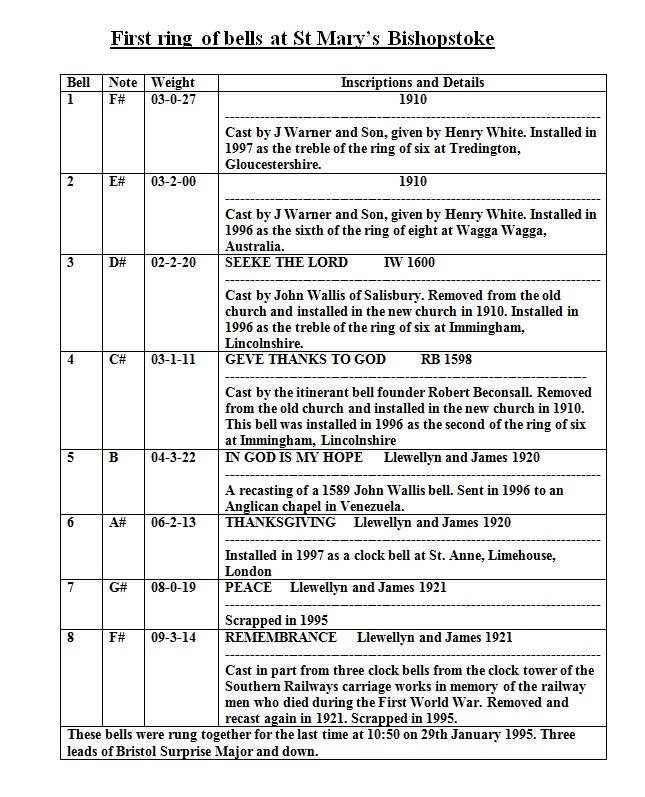 These bells were last rung together on Sunday 29th. January 1995. 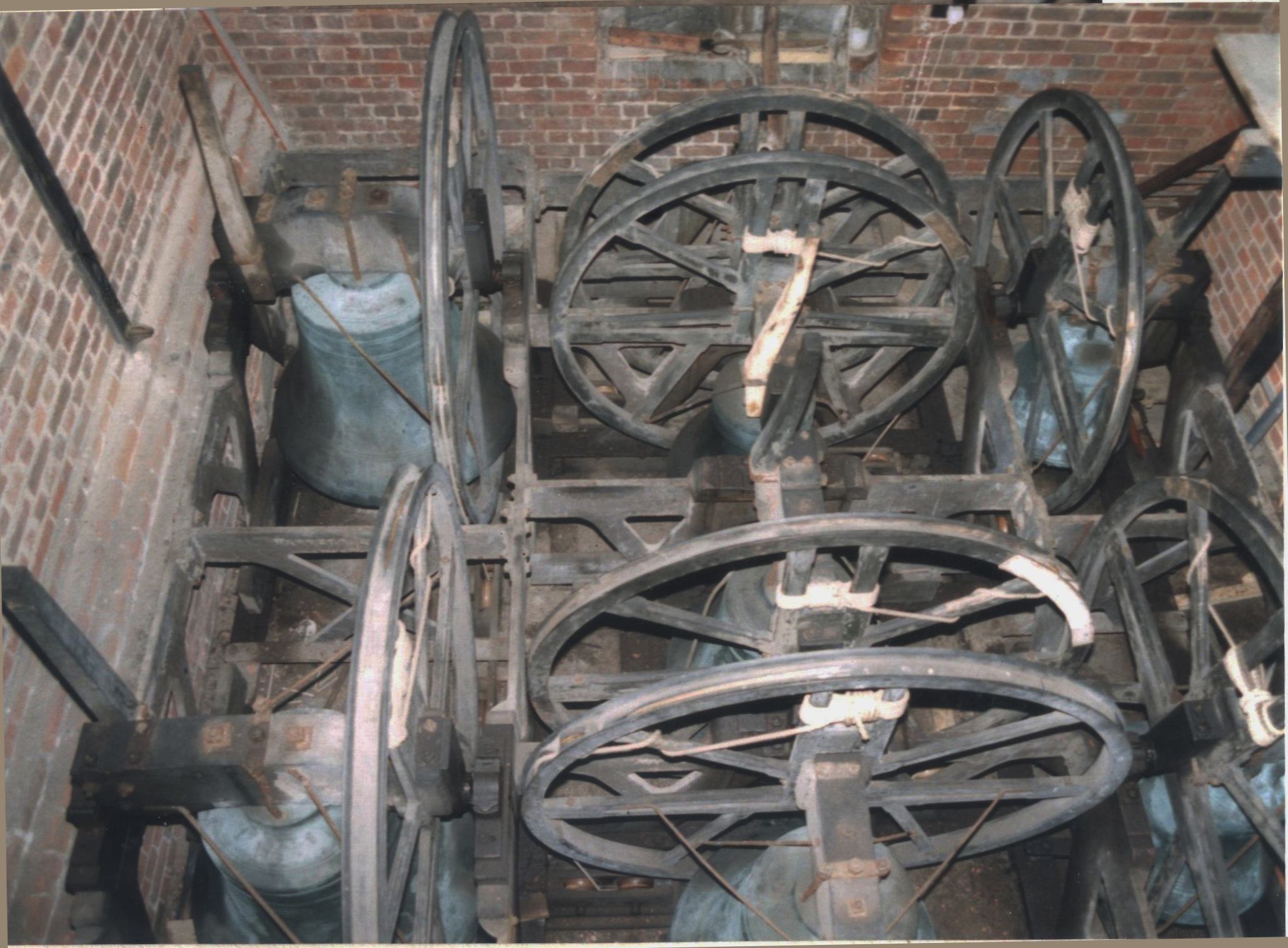 This photo shows the old eight bells in the tower.

The new bells of St. Mary’s

Over the years these bell being made from first three, then five and finally eight different sets bells and by the early 1990s the bells were becoming hard to ring, not very tuneful and needed a good overhaul. So it was decided to start raising funds for a brand new set of bells. The ringers decided to continue the augmentation process but completely replace the tonally poor bells with a brand new, modern tuned ring of ten. Consequently, most of the old bells were sold individually to various churches. The old bells from Bishopstoke can now be found in St. James Church, Immingham, Lincolnshire, St John’s church, Tredington, Gloucestershire, St. Anne’s Church, Limehouse, London and St John’s church, Wagga Wagga, New South Wales, Australia

So in 1995 the frame was strengthened and the Whitechapel bell-foundry supplied the current superb ring of ten bells. The tenor is now a little heavier at 11 cwt in G.

This photo from the Eastleigh Weekly shows “The Wedding Bell” being lowered into the frame by some of the bell ringers. This bell was paid for by the ringers from money that was paid for ringing at weddings. Bishopstoke ringers also rang for weddings at other Churches who didn’t have their own ringers to add to the fund. 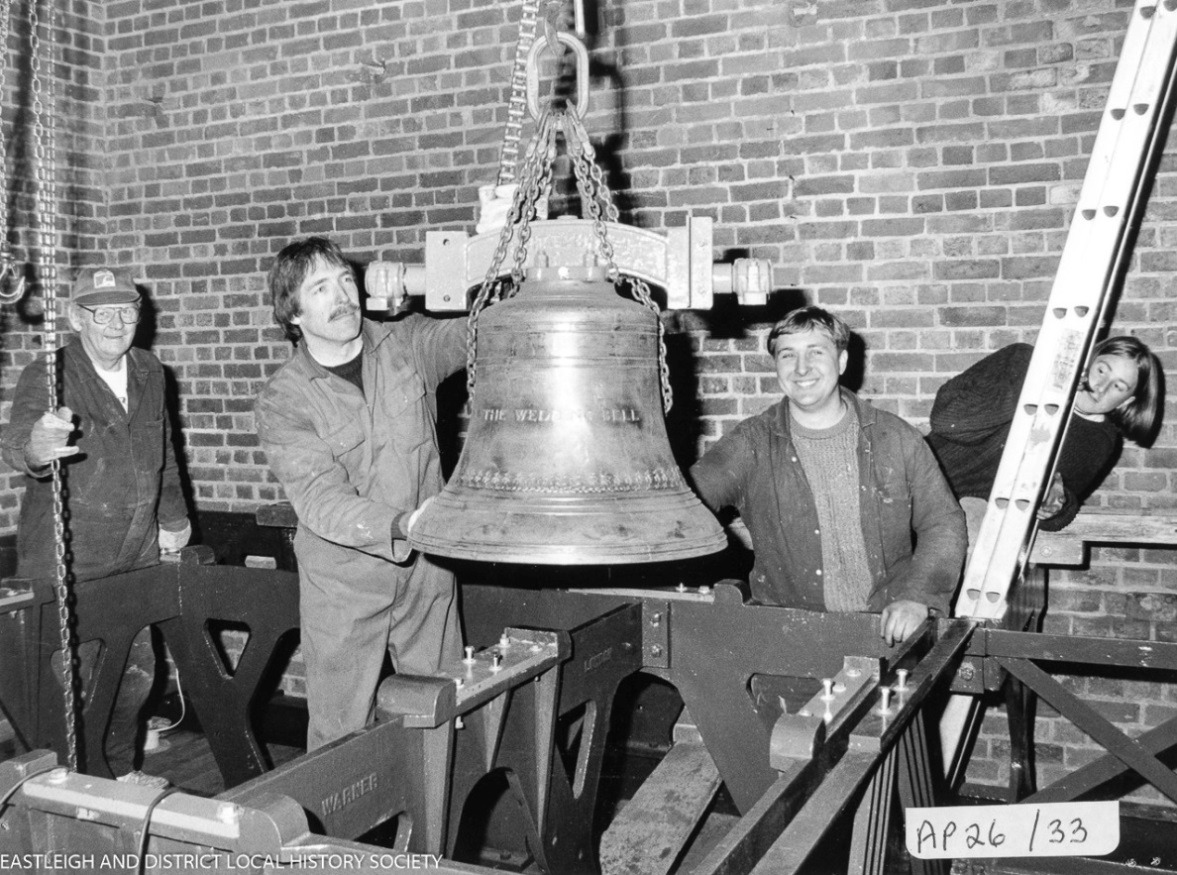 By 1995, the Whitechapel foundry had only cast three complete rings of ten bells since the Second World War and the one prior to Bishopstoke’s was for Westminster Abbey!

This photo is of the new 10 bells, shortly after they had been installed into the tower at St. Mary’s in 1995. 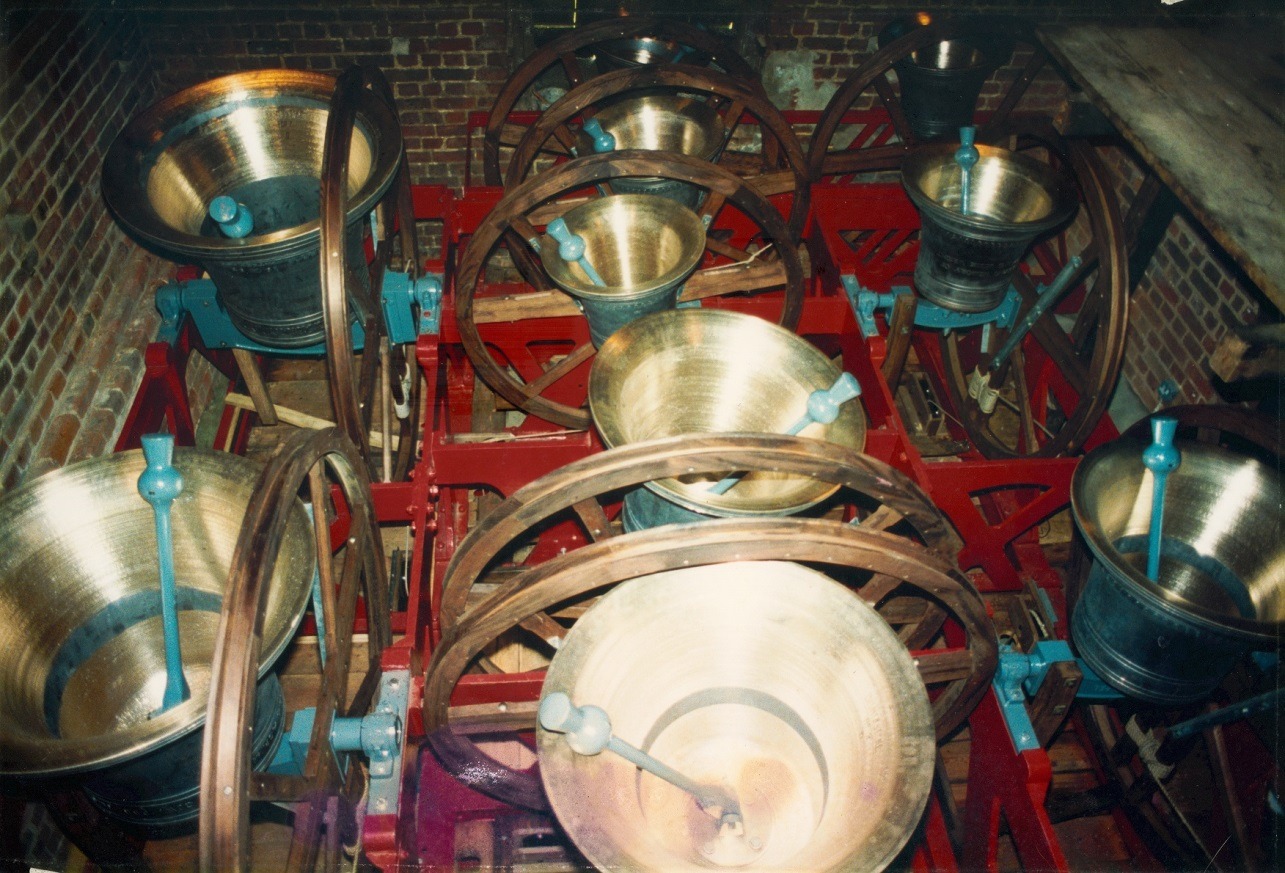 History of bells at Bishopstoke   (part 2)

(with thanks to Flanders and Swan)

As well as ringing the tower bells, for many years the Bishopstoke ringers also rang tunes on handbells. This was started under the leadership of Tom Chapman in the 1960s.                Each year, the ringers got together at Christmas time and practiced carol ringing. Then they visited various places in December to entertain people and often collect money for various charities. Over the years they performed at supermarkets, shopping malls, bazaars and pubs near and wide. They also performed each year at the carol service at St Mary’s on the Sunday before Christmas.

The one armed bell ringer 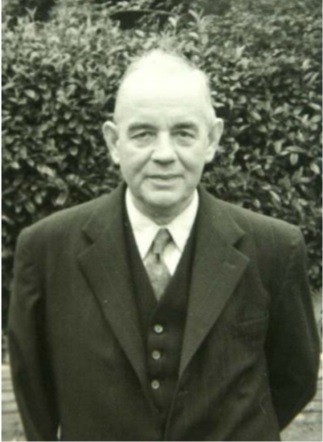 George PULLINGER (1892 – 1966) represented the Winchester and Portsmouth Diocesan Guild on the Central Council (of church bell ringers) from 1933 to 1961 and attended 22 meetings. George Pullinger was born 15th February 1892 at Owslebury, Hants. He began ringing in 1908 at nearby Upham. He died October 23rd 1966 in the belfry of St Mary’s Cheltenham during service ringing and was buried in the Garden of Rest at the parish church of Willingdon, where he had spent the last seven years of his life as a ringer and churchman. He was a member of Woolton Hill tower during 1913/4. From 1919-1927 he was a member of the far-famed North Stoneham tower, then a ring of eight. From 1927- 1959 he became a regular member of Bishopstoke tower. After his retirement he moved to Cheltenham. He was an excellent striker and achieved better results with his one arm than many achieved with two. Peal ringing was a secondary interest: his passion was teaching, good striking and encouraging method ringing. Wherever he went he showed a lively interest in local ringing and never lost his Hampshire accent! He rang his first peal in 1913 at the village of Owslebury where on March 1st George Williams conducted Plain Bob Minor for him. It was shortly after this that he moved to Woolton Hill, near Newbury. This is the one peal he rang with both arms. He would be willing to stand in the occasional peal, especially if it was someone’s first, though he found this length of ringing a strain for his one arm, which he lost at the Mesopotamia in the Battle of Nasiriyeh. A gunshot wound to his right arm resulted in its amputation on July 15th, 1915. George started his working life as a gardener in the Stargroves country house in Woolton Hill in the employ of Sir Frederick Ardagh. From here he enlisted in the Hampshire Regiment and was sent to Mesopotamia. He was a school attendance officer in the 1920s and also took his place in the choir as well as in the belfry. He was able to steer a novice through a touch of Grandsire on the treble while keeping most of the rest of the band right as well. He made a point of seeing that any of his tutees looked up the methods they were supposed to ring before visiting other towers when he cycled around the country with them.

Though of dour demeanour, he had a good heart underneath this. At his memorial service he was described as having all the steadfastness and stability “which we have learned to associated with those reared in the rural setting”. His memorial service was supported by the great and the good of many ringing Associations. The address was given by the Master of the Guild, the Revd. Canon K. W. H. Felstead, who described him as “a truly great man and a perfectionist in all that he undertook”. It was decided at the service to ring quarter peals at various towers in the Winchester & Portsmouth Diocesan Guild. Those rung at Bishopstoke, East Tytherley, Sherfield English and Lyndhurst were successful but others were lost. George held many offices in the Winchester and Portsmouth Diocesan Guild; Peal Recorder 1921- 23; General Secretary 1924-29. It was during this time that the Guild was split up into what were to become the Winchester and Portsmouth and the Guildford Guilds. The formation of these two Guilds was largely the result of the work of George Pullinger and George Williams. He was Master 1949-55 and upon his retirement was elected a Vice President of the Guild. Concurrently he was Southampton District Secretary from 1932. He was elected to the Central Council in that year and continued until 1955, attending 22 meetings. George was one of the last of the older members of the Winchester Guild before its re-emergence as two Guilds. He was a lifelong friend of Frank Knapp, a pre-war captain of Kingsclere and took part in the first peal on those bells, Cambridge Surprise Major in 1929, conducted by George Williams. Tributes to him appeared in The Ringing World in 1966, pages 759, 771,791 & 809 and 1967, pages 8 & 21. His peals: Plain Bob Minor 5, Grandsire Doubles 1, Grandsire Triples 15, Stedman Triples 17, Plain Bob Major 14, Kent Treble Bob Major 5, Double Norwich Court Bob Major 22, Cambridge Surprise Major 19, Superlative Surprise Major 10, London Surprise Major 11, Bristol Surprise Major 5, Grandsire Caters 2, Stedman Caters 6, Plain Bob Royal 4, Kent Treble Bob Royal 3, Cambridge Surprise Royal 1. Total: 140. (The Central Council Biographical Record sheet claims a total of 133.) Peals with George Williams 112; at North Stoneham 54; Bishopstoke 22; for the Winchester & Portsmouth Diocesan Guild 75; The Society of Royal Cumberland Youths 5; The Bath and Wells Diocesan Association 3; The Salisbury Diocesan Guild 2; The Oxford Diocesan Guild 1; The Sussex County Association 1.