Peter Mills of the Hampshire Postal History Society has sent me a copy of a letter that was addressed in Bishopstoke, 6th. March 1866 from R.J.Gilman. The letter was posted in the Waterloo area of London on 7th. March 1866 to Lyon, France. 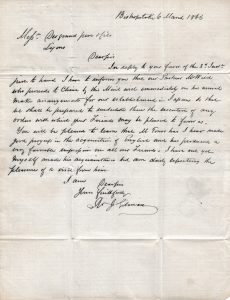 In reply to your favour? Of the 3rd. Inst. Just at hand, I have to inform you that our Partner Mr. Wild who proceeds to China by this mail will immediately on his arrival will make arrangements for establishment in Japan and shall be prepared to undertake there the execution of any orders with which your friends may be pleased to favour us. You will be pleased to learn that M Tourv? I hear made good progress in acquisition of English and has produced a very favourable impression on all our friends. I have not yet myself made his acquaintance but am daily expecting the pleasure of a visit from him,

I am Dear Sirs

This letter was written by R.J.Gilman who owned “The Mount” Estate. Richard James Gilman had been born in 1811 and was the fifth son of John Gilman, a merchant in the City of London. As a young man he entered the offices of Messrs Thompson, Tea and Produce Brokers, in the City of London and eventually travelled to China, becoming a “tea taster” with the Canton based firm of Dent & Co. After spending some years in their service, Richard, in 1847, founded the firm of Gilman & Co. This was a period when British Colonialism was at its height and Gilman & Co became one of the most influential companies trading in Hong Kong. Richard Gillman was a very successful businessman who, according to an article written by his great great-great nephew, had also helped to found both the Hong Kong Chamber of Commerce and the Hong Kong and Shanghai Bank. We know this organisation today as H.S.B.C. Having rapidly made his fortune by the age of 44, Gilman returned to England in 1855, retaining a large share as a senior partner in the firm. He married the widow of the Colonial Surgeon for Hong Kong in 1856 and purchased the estate at Bishopstoke, which by this time was known as “Stoke Mount”. It seems difficult to imagine that 150 years ago, one of the founders of such a massive multi-national organisation was living within our community. Tea, in the mid-1800s, was a valuable commodity and literally worth its weight in gold. The most highly prized and expensive tea was the first crop of the season. Whilst Richard Gilman was living in Bishopstoke, in 1866 an event which captured the imagination of the British public and became known as “The Great Tea Race” occurred. Four ships competed in the race. The clipper Fiery Cross left Foochow, China, on 29 May and Ariel, Taeping and Serica on the 30th. Taeping was carrying a cargo for Gilman & Co. Astonishingly, Aeriel, Serica & Taeping arrived in the Thames estuary on the same tide, after a voyage which had lasted 99 days and covered around 16,000 miles. Taeping drew less water and was able to tie up in the London docks twenty minutes ahead of Ariel, and about two hours ahead of Serica. Fiery Cross arrived two days later. Taeping was declared the winner and a street name in the London’s dockland district of E14 celebrates her victory. 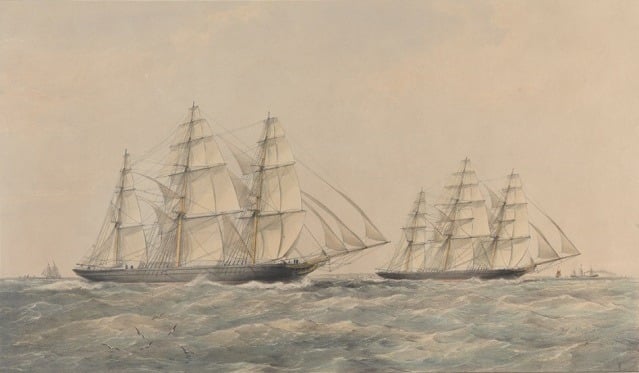 “The Ariel and Taeping” Running up the channel, September 5, 1868 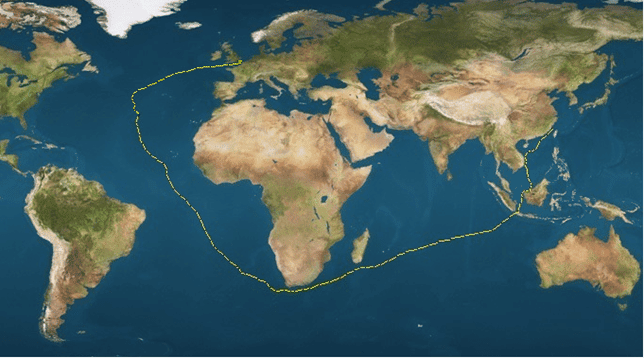 The route, Hong Kong to England

Gilman Court in the Bishopstoke Park retirement village is named after him.